She came to us after a long journey. Twice she had been cast out, twice driven into exile. She wanted a place to rest her weary bones, a place where she could huddle in a chair and conserve what little warmth was left to her.

She had been separated from her own kind from youth. And she had been housebound. She was no street person, no far wanderer. But she liked to sit by the window and look out at the world she did not know. When it was warm, we raised the window, and let her feel the breeze of the wind on her face. And she was happy, just with that. She made no move to cross the windowsill, push through the screen, and escape into the outer world.

And then, one evening, after darkness had fallen, she espied one of her own kind, a trespasser in our yard, a trespasser in her domain. She was offended. And when the other did not heed her warning signals, she was enraged. In a single bound, she crashed through the window screen. Heedless of the odds, she tackled the trespasser. No matter that he outweighed her, that he was street smart and an inveterate fighter. No, shrieking her battle cry, she pounced on him, astonishing him with her fury, and drove him back. He sought to turn, to escape, but she pursued, and drove him under a nearby car.

My partner went to call her back, to rescue her if need be. But she was still full of the battle fury, and resisted being pulled away from the scene of her triumph.

Even now, she often looks out that window, waiting for the next trespasser. That is Lilly, our recently-acquired fourteen-year-old cat. 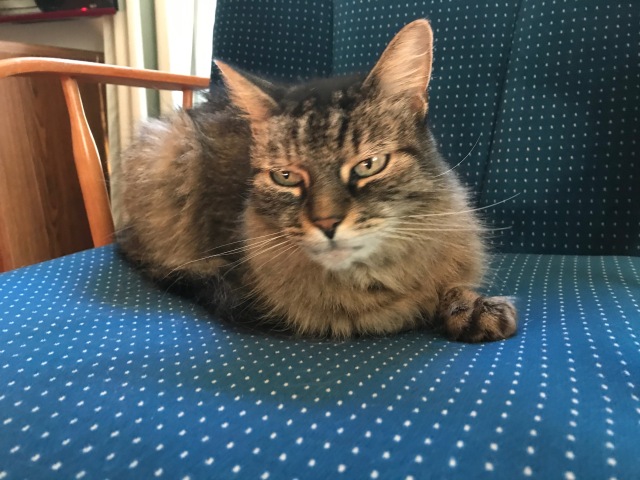 Lilly on her favorite chair

I enjoy history because it helps me understand people. I'm writing fiction for much the same reason.
View all posts by Brian Bixby →
This entry was posted in Uncategorized and tagged cat, warrior. Bookmark the permalink.