There are four of us waiting for our chance to audition as bards before Prince Aynascotauretartovon. (Call him “Art.” Just don’t do it to his face.) I’m the only one with a companion, whom the other three have all hit on at least once. Judging from that alone, maybe they are well qualified to be bards.

Two of the other three are foreigners. The one native is full of cheery news. “The prince likes to imposed tortures . . . ah,  I mean challenges, on bards who fail to meet his standard.”

The more worried of the other two foreigners asks, “How many bards fail to meet his standards?”

The native, whose name is Montrovsitaricalcemon (goes by “Tari”), replies, “Oh, about 19 out of 20. The prince has an indulgent nature.” That last is uttered without a trace of sarcasm.

Tari laughs. “I made the mistake of bilking the prince’s cousin of 16,000 reals. The prince, who is a merciful man, offered me the option of twenty years in the mines, or competing. Seems there’s a lack of competition, given the mortality rate.”

The less worried foreigner heaves a sigh of relief. “Good. That’s two of you that don’t stand a chance.”

The foreigner points to me. “If he’s a bard, I’m a goldsmith.”

We’re getting on each other’s nerves, not surprising since we’ve been cooped up in a castle suite for three days. At least they’re maintaining us in style, though they’re also charging us for our food and lodgings. Well, they aren’t charging Tari: he’s broke.

Inacha is immune to the tensions, largely because she’s charmed the guards into letting her out of our suite twice a day, on the excuse that she is not claiming to be a bard. She’s just been out, and returns with a smile on her face and a nod to me. We retire to our private sitting room.

“How goes the practice?” Inacha asks.

“My most marvelous speech dauntingly demonstrates many artful alliterations.” This does not quite get the smile I was hoping for. I add, “Tari tells me the prince is hard to please.” 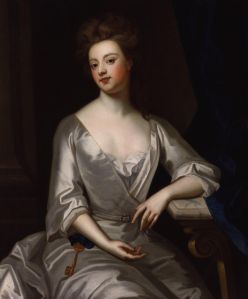 The most famous Mistress of the Robes, Sarah, Duchess of Marlborough, wearing the gold key of her office

“I just spent an hour talking to him, to the horror of the guard accompanying me.” Inacha’s eyes twinkle. “Also to the Mistress of the Robes, who was sympathetic. Seems a bard seduced the prince’s mother. His own paternity is in question. It doesn’t give him a positive attitude.

“Still, I got some helpful tips. Appearances count; be showy. If you can’t speak with a native accent, make your accent quite foreign; it will intrigue the prince. And it’s his Mistress of the Robes who will determine what sentence will be imposed on us if you fail. She’s either his actual mistress or maybe she’s just the dominant partner in their relationship. It’s hard to tell without seeing them together.

“Oh, and the auditions are tomorrow morning.”

“We were told three days from today,” I point out.

Inacha nods. “They did tell us that. They lied, deliberately. The Mistress of the Robes tells me they always do that. The idea is that the bards will have to be more spontaneous and improvise, thus showing their real talent.”

All I can say in reply is, “Did I ever mention I lost every debate in school?”