Chapter 14: If Fortune be a woman, she’s a good wench

Remember I said I liked cute librarians? The one person I trusted in those days was a cute reference librarian. Even though she had been dead for years by that time, she was still cute, and the very best reference librarian a vampire could ever ask for. For you see, Ivy McIlwraith had not been just a librarian. She had also been a sorceress while she was alive. And the combination of those two roles made her the best-informed person in the world on the supernatural.

Ivy and I probably would never become friends except that she spoke with a Scottish accent. I’m mostly Scottish: “Kammen” is what the Germans made out of “Cameron” when my ancestors fled their native land after the ’45 (that’s 1745, folks, look it up) and settled in Bavaria. And my father was an actor who did a great many accents, but who insisted that our native accent was Scottish. So when I asked this new librarian a question and she answered in an accent that I’d never heard outside of my own family, I was intrigued.

Lucky for me, Ivy was just as interested in me. In those days I was a bully and a bookworm, an odd combination for a kid. Ivy would tell me years later that she looked into the future and saw that I would turn into a mass murderer, a real psycho. She decided to change me, bend my character into nobler channels using her sorcery. She even seduced me as part of her program to change my character. Was she sexually manipulating an inexperienced youth? You bet. I never knew so young a body with so old a head, and became completely dependent on her. Was that unethical? She figured that, by the time I was twenty, she’d have straightened me out completely so that I would be naturally good and stay that way, and then she planned to release me. In retrospect, I can’t condemn her. I sure as hell couldn’t at the time, either.

Unfortunately for both of us, Ivy was killed when I was seventeen. She just disappeared, and the cops could find no evidence of foul play, or anything else to show what had happened to her. Five days later she turned up in my bed, telling me she was a ghost, and absolutely refusing to tell me what had happened to her. It was the most devastating experience of my life. Compared to that, waking up in a coffin with Martha cackling over me was a cakewalk. 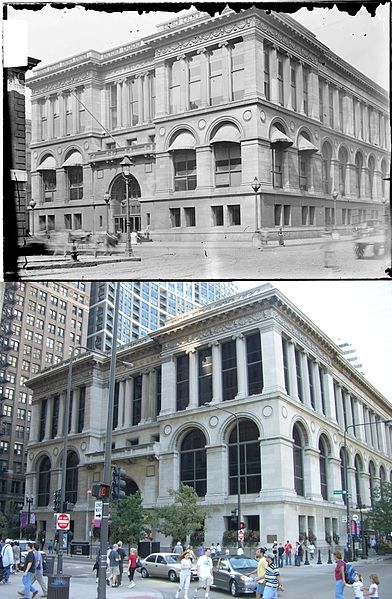 The old library building in 1903, and how it looks today as the Chicago Cultural Center

Ivy sometimes came to me, but the most reliable way for me to see her was to visit her in the main library. This was the old central library, a glorious Victorian structure with a lavish display of wood, marble, and glass in the interior, not the modern building that went up a few decades later. I used the duplicate keys I had made to get into the library and walked over to her old station in the library, carrying the binder Ned O’Donnell had given me.

An interior view of the old library building

Ivy never showed up immediately. She was a restless person while she was alive, and became a restless ghost, always wandering about the library while reading a book. This time, I heard her footsteps coming down the long hall, leather soles ringing on the marble floor.

Of course, she wasn’t actually wearing leather soles; she was a ghost. But Ivy still had some of her sorceress’s powers. She couldn’t really materialize, but she could use sorcery to interact with the material world. When she’d been alive, she’d loved the loud sound of leather soles on the library’s floors. So she’d taken to making that sound when walking about in the library. The stories you might have heard about ghostly footsteps in the main branch of the Chicago Public Library? That’s Ivy playing a joke on the patrons and staff.

Another view of the interior. You can see why Ivy loved haunting this place.

Ivy liked to change her ghostly appearance frequently. This night, I could see her coming toward me in a flapper’s outfit from the 1920s, the yellow fabric complemented by her bobbed blond hair. (In life, Ivy had had black hair.) I was sitting in her old chair, so she just jumped into my lap, gave me the ghost of a kiss, and asked, “What’s cookin’, Shylock?”

I pointed to the binder. “I just got a job offer, Ivy.”

She arched an eyebrow. “Medical leech? Aren’t you a bit big for the job?”

I scowled at her. “Give me some encouragement, my dear. That is a proposal for a CPD vampire police bureau, courtesy of one Ned O’Donnell, who used to be a young flatfoot in his twenties, is now a vampire, and styles himself acting bureau chief.”

Ivy didn’t even touch the binder, just used magic to flip it open and turn all the pages in under a minute. Being dead has upped her reading speed. She turned back to me and gave me a thoughtful look. “It looks good to me, though I don’t know all the details you’d need for CPD. In fact, Shylock, I’d say it’s what you need. You’ve been worried about controlling your dark side on your own ever since you became a vampire. I take it the problem is with this O’Donnell?”

I grimaced. “That’s minor. The kid seems reasonable. In fact, Zalensky, who’s also a vampire now, is backing him, and I’ve never known Zalensky to stand on the wrong side of an issue politically. It’s the fact that Zalensky is backing him that’s got me worried. Why does he think CPD will accept vampires as cops, when they’ve killed every single ex-cop they could get their hands on? What does he think CPD will want to do with vampire cops?”

Ivy got out of my lap, swung around to the other side of the desk, and started pacing. Out of the side of her mouth she said, “If I were CPD, I’d use vampire cops to hunt vampires.”

“And that is what I bet Zalensky thinks, too. But, as you read, that’s not what O’Donnell has in mind. He thinks CPD will let us start by policing humans, then vampires, then other supernatural creatures, and finally sorcerers. In fact, he’s ignoring the obvious first target for a vampire police bureau: Martha Fokker. Catching cop killers is second only to getting better press at CPD.”

Ivy curled her lip at my last comment before tossing me an inquiring look. “Is O’Donnell another one of Martha’s vampire offspring?”

I nodded. “And Zalensky, too. In fact, O’Donnell has a list of all the cops Martha turned into vampires, and they’re going to be his recruitment base. He got the list from Martha, which means he’s on good terms with her. And that, I’m betting, is why he’s ignoring the obvious.”

Ivy came to a stop directly opposite me and leaned forward with her arms on the desk. “So what are you going to do about it, my dear?”

What, indeed. I’d been leaning in favor of it for a lot of reasons. It would be good to be on the force again, with colleagues. Being a vampire had made it harder for me to control my sadistic impulses, vampirism being inherently sadistic. On the other hand, as I told Ivy, I had my reservations.

“I’ll go with O’Donnell on this,” I answered. “He says he expects everyone to help make this proposal as good as it can be, and I’ll hold him to that. I’ll push him on the vampires-policing-vampires angle, him and Zalensky. Maybe I can get Zalensky mad enough that he’ll say something revealing.”

Ivy and I both smiled at the thought. She had heard about my previous run-ins with Zalensky when we were both cops.

“And,” I concluded, “I’m not going to just depend on O’Donnell and Zalensky to make this work. My ventures will not in one bottom be trusted. I’m a detective, dammit, and those two are not. They don’t know how to go about getting information the way I do, nor do they have my contacts.” Had to wonder how many of my contacts would still want to speak to me now that I was a vampire.

Ivy observed, “Zalensky’s well-connected among the higher-ups in the department.”

“Ah, but I know two women who have even better contacts than Zalensky, and I’m pretty sure they’ll both still talk to me.”

Ivy’s expression turned arch. “Former mistresses, perhaps? Are you going to beat them into submission and drink their blood?”

That seemed a bit raw, coming from Ivy. Must have struck a jealous streak. I gave an emphatic shake of my head. “No way, Ivy. The two women I’m thinking of are my sister Kate and Sally Truax.”

Ivy brightened up with a smile. “Good choices.”

Relieved, I replied, “Provided Truax doesn’t try to pry out one of my fangs to see if it’s real.” Hell, I wouldn’t have put it past her to demand I feed on her so she knew what it was like. “And I am going to hunt down Martha. If that little creep is going to cause us problems, I want to be ready for her.”

Ivy sat on the desk, hunched her shoulders, contemplated the dust on the desk top. I knew she was thinking, so I kept my mouth shut. Finally she gave me a worried look. “Shylock, I never told you in so many words, but ever since I’ve known you, I’ve been looking out for you. I’ve always known where you were, and always expected to intervene and protect you if you were ever tackled by a supernatural creature you couldn’t handle.”

Naturally I asked, “What could?”

Ivy threw up her hands, got off the desk and resumed pacing. “The only thing that should be able to do that is another sorcerer.”

“Which means Martha has help. Why would a sorcerer help Martha?”

Ivy shook her head repeatedly while pacing and thinking about the subject. “Pure idle mischief, maybe. More likely politics. Mayor Daley is thick with Edward Cross, the supreme sorcerer for the Midwest. Maybe Martha is part of some subtle intrigue against one or both of them.”

“Maybe they’re the ones behind Martha.”

Ivy puckered her lips, blew me a raspberry. “No way, not their style, either of them. But whoever is behind Martha, they’re dangerous, Shylock. I won’t be able to protect you. So be careful.”

(Link to next chapter)