Chapter XVIII – The Politics of Hiding

The next morning, I am served a hearty breakfast by my host. He also tells me I will be staying put for a day or two. “Your presence would not help your friends at this time.”

“How I learned this is no concern of yours,” he replies in a frosty tone. And then he actually relaxes a bit, sits down at the table where I am eying the food, and lets a shadow of a smile cross his face. In the nearest thing to a positive tone he’s taken with me, he says, “Eat up, man, while the food’s still hot. I’ll tell you what I can while you eat.”

So I dig in, and the man explains. “Your master is a tricky one. He complained to the Chancellor that you are missing after an altercation with Haulloran’s men, and that he fears you may have been secretly killed by Haulloran. Haulloran’s story about how you and our mutual friend trounced four of his men was not thought credible. So now the earl is in a sweat to find you and bring you in unharmed. And your master wants you to stay here for a while to let the earl sweat some more.”

I think about this as I eat. This would only make sense if one thing were true. “The Earl does not want to reveal why he sought me or what he planned to do with me.”

I don’t like the sound of that. And then another thought strikes me. “The earl’s wife is a witch. She could find me here.”

The man’s smile disappears. “I’ve been informed that is unlikely. But I am no magician. You are a magician’s apprentice. Is there anything you or I could do to minimize the chance?”

I think about it. She would be trying to trace me using something linked to me: my name, a possession of mine, someone’s memory of me. Unless Sarton got there first, stealing something of mine from my room would not be difficult. But she has no personal link to me. So she’s going to have to expend a lot of power to find me. But if I don’t match up with what she expects . . . ?

“This may not work, but it’s the best I can come up with. Can you get me hair dye to blacken my hair? Women’s clothes for me to wear? I want to make myself look unlike how I usually look. So if she sees me, she may not recognize me. She doesn’t actually know me.”

The man brightens again. “I think some things can be arranged. I’ll be back.” He gets up and goes down the stairs, being careful to close them up after himself. 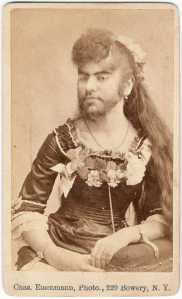 Spare a moment to think of the abuse bearded women have suffered. Annie Jones (1865 – 1902) spent her life being exhibited by P.T. Barnum. That’s no way to live.

Two hours later, I wouldn’t recognize me. The man and a woman who I presume is his daughter have rubbed soot into my skin and hair, stuck a fake beard on my face, and have me outfitted in a woman’s chemise, gown, and apron. I look like a peasant woman from Aelestoyn, except for the beard, of course. The daughter found the entire process very amusing, and laughed out loud when I came out with the gown and apron on.

But now I’m alone again. My skin itches. I focus on reading a light romance, every so often pausing to scratch when I shouldn’t, or worry when it won’t help.

The man comes with dinner. I’d been hoping for his daughter. He tells me he has no news, except that the Earl of Haulloran’s men have been seen all over the city, presumably looking for me. He jokes that I look like a member of a traveling freak show. It’s so atypical of him to make a joke. I realize this is his way of hiding his nervousness.

I’m feeling it myself. Although he leaves me a candle for reading, I turn in not long after sunset. I’m asleep almost immediately.

When I wake up, it’s because the sun is shining in my face. Oh, and I’m being repeatedly shaken by someone. I open up my eyes. I see it is Mia. I sit up. I’m in the bed in the washroom in Sarton’s workplace. Sarton must have magicked me here. I’m safe. I feel so relieved.

Which ends a moment later. “Master,” Mia says to me. “You have to hurry and be ready to be taken before the king and queen to answer charges against you.”