I swear it’s a trick. I keep hearing female giggling, but when I follow the sound, I don’t find them. It’s a wonder I’ve not pitched myself into a ravine looking for them. They must be around here someplace!

Who would have thought Mia and my sister Jallia would become fast friends? The rest of my family acted as if I’d brought a monster into the house, they are so afraid of what a fairy might do. Jallia acts like Mia’s her sister, better than her actual sisters, really. The two go off and spend day after day walking the hills and ravines, chatting away merrily about almost everything. And I do mean everything. I can’t be sure, but Jallia’s dropped some hints that she knows about what happened with Lady Vorana, Mia, and me. I’d really like to know what Mia thinks of that whole business now, but I’m not going to pay the price of listening to my sister talk about my sex life to find out.

And we have urgent affairs to attend to. We have to get to the Tebestora School in a hurry. Mia recognizes what Honorable Strunstur meant in saying “Ovad,” and we need to stop it before it happens. I have to get back to the palace to give Sarton the dragon’s teeth, of which I now have plenty, and warn him what Lady Gwella is up to . . . assuming I can figure it out. And I’m worried that Lady Gwella means some ill for Paviara . . . like explaining to Paviara how she, Lady Gwella, is carrying my child.

Then I hear my name being called from the house. I give up on finding those two for now. Someone else wants me.

I walk in the back door. My stepmother is in the kitchen. She turns to me and says, “You didn’t tell us you’d have a warrior staying with us.”

To which I honestly reply, “That’s because I didn’t know I was. Who is it?”

She shakes her head. “I don’t know. Your father was talking to her, and asked me to bring in some food and drink, ‘suitable for company,’ he says. Really, Tollon, I’m not running a boarding house here, what with you bringing in a demon and now a warrior.”

“Mia’s a fairy, Artasta, and if I can get her and Jallia to stop acting like schoolgirls, I’ll be off in a flash.”

And then Artatsta surprises me. She gives me a worried look. “The warrior’s a big one, Tollon. Are you in some sort of trouble?”

I gently touch her face with my hand. “Always. But not that kind. Thank you for the concern, Artasta. Besides, I doubt any real warrior’s come here to kill me. They’d probably send a dwarf with a gamy leg.” And with that, I leave her and head over to the family room.

I see my father listening with real interest to the other person talking. Whoever it is has the gift of gab. So I walk in.

The other person stands up, and I realize why my stepmother Artasta called the visitor a warrior, not a soldier. She’s wearing full armor, visibly carrying at least five weapons, and stands over six feet tall. I look up at her brown face, and Katrina of Moss gives me a smile that shows she’s still interested in me. “Hiya, Tollon,” she says. “Talking with your father here about the Karnathian campaigns. You never told me he fought in the first one.” 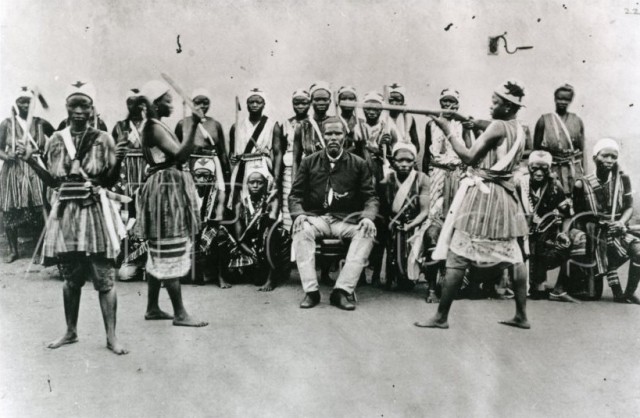 The Amazons may have been a myth, but their African counterparts were real.

She steps forward, cups my head in her two massive hands, and looks down at me. “So, when do we go off and kill some people?”

I’m saved from demonstrating my bewilderment by the entrance of Jallia and Mia at the far door to the room. Mia sees Katrina, and in a formal voice that sounds like it comes from someone much bigger than her, says, “Katrina of Moss, it is I who summoned you in Tollon’s name. You are needed to help avenge the Division of Spheres.”

“And,” Jallia chimes in, “Tollon wants to go a few rounds of wrestling with you.”

The double entendre does not escape me. If my skin weren’t already red, I’d be blushing.