Chapter XXIII – Not My Neighborhood

Spirits fall into classes. Some of those classes, neither Mia nor I can figure out. Voronzha, for example, is a spirit with an affinity for water, clocks, sexual attraction, and explosions. She (whatever gender means for spirits) will try to influence you into becoming a monomaniac. And she’s one of a class of spirits whose attributes seem to be based on the logic of a rabid hamster.

I’m not using one of them. I’m going to stick to one I understand: Tavartet. Tavartet belongs to the geographic class of spirits. They deal with spatial issues. If you’re good, you can get Tavartet to transport you instantly from place to place. But I’m going to use him for a more modest purpose: finding out where I am. 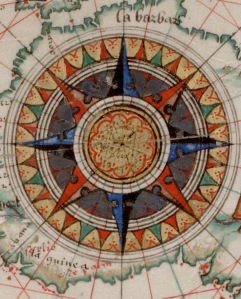 I draw a compass rose in the dirt of the yard with my foot. Elegance does not count, not for a spell like this one. I stand in the rose, close my eyes, visualize the rose with Tavartet’s name upon it, and summon him, calling on him to show me where I am.

Major spells require a lot of effort, or a bribe to the spirit. Tavartet seems to regard telling people where they are as a loss leader. I don’t need to give him anything. I just keep concentrating on the compass rose, Tavartet’s name, and what I “command” him to do.

Slowly, in my head, a new vision displaces the compass rose. It’s a map. It’s a weird kind of map. It’s like a three-dimensional model of the city and palace. And it shows me exactly where I am.

I remember to thank Tavartet before dismissing him. Giving him a gift later wouldn’t hurt, but that’s for later. I open my eyes, and the vision of the map goes away.

But I know where I am. I’m in Gehulia, the district in the city up against the Great Swamp. This district is home to slaves, poor people, criminals, and more poor people. And the place I came out of wasn’t The Widow’s Respite, but a tavern with a more noxious reputation, Herkan’s Hangman. It’s supposedly built on the site of a gallows. Many of its denizens will probably end up ornamenting one.

The good news is that it’s within the city’s walls. That’s one less obstacle I’ll have to deal with.

The bad news? People in Gehulia don’t like strangers. It’s said there are more unsolved murders and disappearances in Gehulia than in the rest of the city.

So I quietly walk out of the yard into the alley, looking carefully both ways for sign of anyone else stirring at this time. I walk quietly down the alley. At the end, I stay close to the wall of a building, and carefully look into the street that crosses there. It’s quiet. I cross, and go into the alley across the street. One block down, only twelve more to go.

Except suddenly the alley I’ve walked into isn’t an alley anymore. It’s a cellar. I whirl about, trying to figure out where I am, and am grabbed on both sides. I’m picked up, and slammed into a wall, banging my head against it.

By the time I recover my senses, I find that I’m chained to a post in the cellar. Two big men, roughnecks by the looks of them, stand on either side of an old woman. Her hair is black, her skin is red like mine, but wrinkled with age, and she’s wearing what looks like an expensive blue silk gown that is entirely out of keeping with the ragged men on either side of her.

Her voice is thin and brittle. “How now, young magician? What are you doing here? Are you of the ken, or against the ken?”

I have a feeling I’d better answer this correctly. Only I have no idea who or what “the ken” are.