“Magic involves commanding spirits to perform to your bidding.”

The three of us sit around a table in Sarton’s workshop. Sarton is holding forth. He’s in his working clothes, made of leather for endurance and protection. Mia is dressed in burlap again. Sarton is having appropriate clothes made for her, and for me as well. I’m dressed in the clothes I used to wear playing ball with my fellow servants.

“Spirits influence according to their nature. You use a spirit to cast a love spell, the spirit will try to influence you to become more amorous. Hence, the greatest danger comes from spirits that can exploit weaknesses in your nature.

“Tollon, you are impulsive. You must beware of any spirit pressuring you to act quickly, or to go beyond limits you set for yourself.

“Mia, you are too self-effacing. However appropriate that is in a slave, it can be fatal to a magician. I would not want to see you attempt an invisibility spell any time soon, for fear that you might be influenced into never becoming visible again.”

Sarton pauses. So I ask the obvious question. “What’s your greatest weakness, master?” 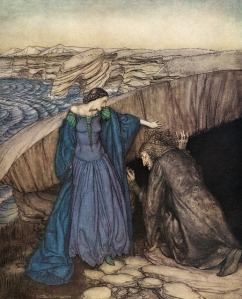 Famously, Merlin’s apprentice defeated him by exploiting his weakness, which is why Tollon’s question is perilous for Sarton.

He laughs. “Curiosity, my boy. Why do you think I spend so much time trying to observe what goes on in the world? And curiosity is very dangerous, because it has no end. So I set firm limits to mine, and change them only when necessary. Any other questions?”

You bet. “None of the magic I’ve done with you so far has called upon a spirit.”

“Wrong.” But Sarton is not displeased. “So far, you’ve handled magical artifacts. They were given their power by spirits. So you’ve been dealing with them at one remove, Tollon. That’s all I dared risk with you before now.”

Ah, yes, my lack of character in Sarton’s eyes. I can feel myself blushing. So I’m happy Mia actually chimes in. “Master, how do we command the spirits?”

“That’s most of what I have to teach you both, Mia.” Sarton strokes his beard for a bit. “To start, you need to understand yourselves. You must impose your will on the spirits. So what affects your will?”

“What I think,” replies Mia.

“So your brain is involved,” replies Sarton. “What else?”

Mia and I sit there, without a clue. Sarton waits patiently. And then I have an idea. There’s an old saying that some men think with their genitals. So I hesitantly say, “Reproductive organs?”

Smiling, Sarton approves. “Certainly. They definitely influence what you think. What else?”

With a clap, Sarton says, “Certainly. Well, your stomach and your belly. Anyone who doesn’t think those organs don’t affect one’s thinking has never had an upset stomach or gotten drunk. Speaking of which, Mia, fetch us some refreshments. I want to make sure my mind is working properly.”

Mia gets up, and heads toward the kitchen. Sarton follows her with his eyes until she’s gone, and then sighs. To me, he says, “She’s smart and she thinks like a slave. That’s a dangerous combination. Are you still getting visions of her and Vorana?”

I screw up my face as I answer. “The frequency went down considerably while I was in hiding, and having her around isn’t causing them to increase anymore, which is weird.”

“Good.” Sarton is all seriousness now. “Learning magic is going to be tough on you, boy, but I have to give you an even tougher job. You have to train Mia not to think like a slave. I can’t do it; I have to play the master to both of you. But you can.”

“How do I do that?” I ask. Because I really can’t figure out how.

“Use your brain, Tollon. And your stomach. And your reproductive organs. But use them wisely,” is all Sarton tells me.