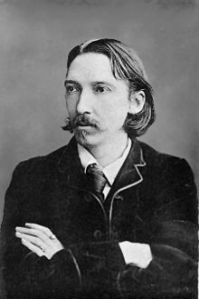 No, this isn’t about Robert Louis Stevenson, though he does play a part. Stevenson, for those of you who don’t know, was the author of Treasure Island. He spent his last years before he died in 1894 on an island in Samoa, where he earned the name “Tusitala,” or “Teller of Tales.”

Stevenson does not have a high critical reputation. He is often seen as a teller of boys’ adventure stories. Bah! The man knew how to spin a yarn that people enjoy and come back to, over and over again. And if you read between the lines, even Treasure Island, “boy’s book” though it is, contains serious lessons on social status and wealth, honesty and treachery, and the bounds of civilized behavior. It does not do to undervalue Stevenson, nor the role of “teller of tales.”

Stories begin someplace. For me, stories begin with my father. This is him, in one of the roles for which he would have liked to be remembered, a soldier in the Second World War.

Stories begin with my father because he read us stories. He would read us children stories at night, before bedtime. They were stories of faraway places and strange things. They were not the elaborate fictions suited for adults, but the simpler fictions that a child could comprehend. They made our world, a depressingly ordinary suburban small town in New England, a bigger world, a world of wonders. It was an inspiration. If I read about Merlin in Mary Stewart’s The Crystal Cave when I was ten, and imagined Merlin appearing before me on the shores of Lake Winnisquam, it was thanks to my father. If I wanted to see the world, it was thanks to my father.

What was more extraordinary was that my father could make even our dull home town seem interesting. We’re talking about a town that didn’t even have a red-yellow-green traffic signal in it, it was that dull. But my father made it interesting. He was well-read on local history, having grown up in the town, and could talk about the conflict between the Indians and colonists as if it had happened to him. It helped that we were related to many of the colonists and their descendants who figured in his stories. And what a collection they were! There was Lovell and Paugus’s son, hunting each other with deadly intentions. There was the Revolutionary War veteran Job Shattuck using his sword to fight off the minions of a tyrannical governor who had tracked him through the new-fallen snow. We could go and stand on the very common where the fight had taken place.

But those were only the stories he learned from others. He had stories of his own! There was the Irish grandmother, Bridget Lee, whose immigrant sisters walked barefoot through the winter from Montreal to Boston. There was Captain Palmer, the old Civil War veteran, a hero who had sacrificed so much for his country, whom my father had known personally. And there was the story of the cow that got caught in the railroad tracks. Forgive me, I cannot tell that story here and do it justice. I would need my father’s narrative skills and gestures to turn it into a living story. It just doesn’t work in print. It was THE favorite story of my siblings and me when we were kids. We often went by the very railroad tracks, and could imagine the cow caught there, the train coming down from Townsend Harbor, and my father’s Uncle Charles desperately trying to free the cow.

What my father did for my sister, my brother, and me was to make us interested in stories. Despite having radically different educations and different tastes, we are all readers. I have no doubt that we could all be writers, too. We know what a story is. We had that burned into our souls as children.

If, on this blog, I manage to tell at least one story that entertains people, then much of the credit belongs to my father. For us, he was the real “teller of tales.” It’s a title and an honor. Maybe someday I’ll deserve it myself.

I enjoy history because it helps me understand people. I'm writing fiction for much the same reason.
View all posts by Brian Bixby →
This entry was posted in History, Writing fiction and tagged father, Fiction, History, inspiration, memoir, Robert Louis Stevenson, Writing. Bookmark the permalink.

6 Responses to “Teller of Tales”