The phrenomagnetists, 19th century scientists of the mind

It’s not easy being a researcher into the powers of the human mind. And without today’s technologies, it was even harder in the nineteenth century. But they did have a map of the human brain, and tools to make it work differently. The only problem was that when they put the two together, the result was a disaster for both the map and the tools. The people who combined these two were the phrenomagnetists, and this is their story.

Phrenomagnetism? What’s that? It was the fusion of two distinct sciences, phrenology and animal magnetism. Phrenology supplied the map of the mind, animal magnetism supplied the tools. Both sciences were born in Europe in the 18th century, yet the explosive merging of the two was primarily an American phenomenon.

Back in the late 18th century, Dr. Franz Joseph Gall noticed that people with similar brain injuries developed similar mental disturbances. He theorized that the brain was divided into organs with specific capabilities, and that the size of the organs determined how much of those capabilities one had. Gall used patient data to map these organs. This was the basis for phrenology. Since it was hard to figure out exactly how large the phrenological organs were, short of opening up patients’ heads, people began assuming that the organs corresponded to the shape of one’s skull, a reasonable surmise.

Jacob Spurzheim brought phrenology to Boston in 1832. It spread rapidly across the country. Soon, Americans were examining each other’s heads to determine their characters. Two brothers, O.S. and L. N. Fowler, founded The American Phrenological Journal, and became the most successful popularizers of phrenology. If you’ve seen a phrenological bust or chart, like the one below, it’s almost certainly based on the work of the Fowlers. 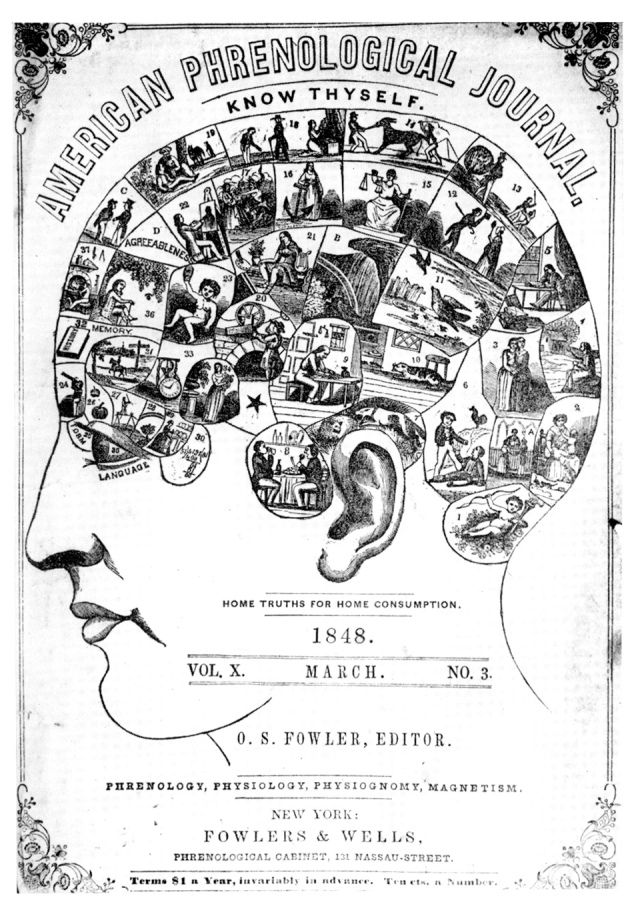 This is your head on phrenology

The problem with phrenology was that it offered no way to improve one’s self. After all, one’s skull doesn’t change shape after one becomes an adult. Dr. Joseph Rodes Buchanan was so committed to phrenology that he maintained the skull did change shape as one’s phrenological organs changed, but he was the exception. What was needed were tools to change the phrenological organs without changing their size. And, sure enough, a tool appeared: animal magnetism.

Fr. Maximilian Hell, a contemporary of Dr. Gall, discovered he could influence people with the use of magnets. Franz Anton Mesmer took his ideas and worked them up into a fantastic theory about how one person could change another by altering their “animal magnetism.” His demonstrations and treatments became so popular that people began calling it “mesmerism.”

Four years after Spurzheim had brought phrenology to America, Charles Poyen did the same for animal magnetism. He demonstrated how animal magnetism allowed him to command patients who appeared to be sleeping. They would do as he said. They could read with their eyes closed. They could see events at a distance and diagnose diseases, and many more wonderful things. Animal magnetism became as popular as phrenology.

Somebody, no one now knows who, speculated that one might be able to alter the phrenological organs by applying animal magnetism to them. It turned out to be true. If a patient’s organ of veneration was magnetized to a higher energy state, the person began to pray. If the organ of philoprogenitiveness, then the patient became very tender toward children. In one amusing experiment, a man’s organ of destructiveness was magnetized, and he proceeded to destroy most of the furniture in the room before the operator could demagnetize him!

One of the first phrenomagnetists was this shady character named Robert Hanham Collyer. That’s Dr. Collyer to you, thanks to a one-year degree from Berkshire Medical College (long since defunct). Collyer had got into the phrenology game with his own handbook, but he wasn’t getting much attention compared to the Fowlers. He needed something new to distinguish himself. So he used animal magnetism to explore the phrenological organs. And surprise! He was able to report that he had detected a new phrenological organ using animal magnetism.

That put phrenomagnetism on the map. The Fowlers, not to be left behind, went looking for their own phrenomagnetist. They found Rev. La Roy Sunderland, a Methodist preacher, who was soon able to report he had found several new phrenological organs. The American Phrenological Journal proudly reported his results. Take that, Collyer!

Phrenomagnetism looked to be the coming thing. The nineteenth century was going to get its own version of mind control! But then it all fell apart.

The first problem to emerge came from the way animal magnetism was demonstrated. Far too often, the operator was man and the patient was a young woman. The sexual possibilities of a man bringing a woman under his control were too obvious. People grew suspicious. Collyer, slick fellow that he was, tried to spike such rumors about himself by publishing an account of how he had magnetized a young girl to make her forget an unsuitable suitor at her mother’s behest. It seems to have shifted suspicion away from him. Others were not so lucky. An anonymous pamphlet came out accusing a nameless individual who just happened to resemble La Roy Sunderland of using animal magnetism to seduce his second wife! Sunderland, who had indeed recently married for the second time, was forced to put out a pamphlet rebutting the charges. After that sort of scandal, a lot of people lost interest in animal magnetism. (Though lonely teenage boys would remain devoted to the idea of hypnotizing girls.) 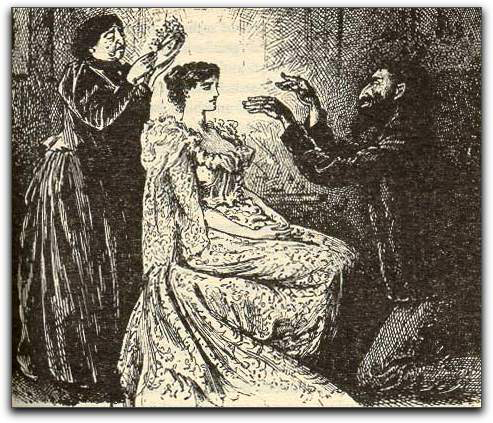 You are under my power!

The second problem emerged out of La Roy Sunderland’s attempt to find new phrenological organs. Oh, he was successful. Too successful. He found scores of them. His work threatened to undermine the standard phrenological model used by the Fowlers. They decided that animal magnetism was bunk, and broke off all association with Sunderland. His name and work never again appeared in the pages of The American Phrenological Journal.

The third problem was that at about the same time, Collyer was coming to the opposite conclusion, that it was phrenology that was bunk. He accidentally magnetized the wrong phrenological organ in a patient, and the patient reacted as if Collyer had magnetized the right one! Collyer was soon able to demonstrate that the entire power of phrenomagnetism came from the animal magnetism, and that the supposed layout of the phrenological organs was irrelevant.

That put paid to phrenomagnetism. Its heyday had lasted only a few years in the early 1840s. Its practitioners reverted back to either phrenology or animal magnetism, or abandoned the field altogether. The Fowlers continued as the champions of phrenology for decades thereafter. Joseph Rodes Buchanan abandoned the idea of one’s skull changing shape. Instead, he took up spiritualism and coined the term “psychometry” to describe the ability of people to read the history of an object by touching it. La Roy Sunderland increasingly turned to Abolitionism, and helped split the Methodist Church over the issue of slavery in the 1850s.

And Robert Hanham Collyer? He would turn up three decades later as a member of the Anthropological Society of London, a forerunner to the Royal Anthropological Institute. He was trying to claim to be the discoverer of anesthesia on the basis of his work in animal magnetism, and was dressing up his once-discarded phrenological ideas in the terminology of contemporary human anthropology. Still the trickster.

5 Responses to The phrenomagnetists, 19th century scientists of the mind