Blood has been shed in the sorcerers’ war, and Ned’s vampire cops are caught in the middle. “Mother” Fokker isn’t happy about that, and she’s not exactly known for her good temper. But you don’t get to be a centuries-old vampire-sorceress by being stupid. So in chapter 30 of Martha’s Children, Martha Fokker decides to go the diplomatic route . . . by invading the home of Chicago’s legendary mayor, Richard J. Daley!

Daley (1902 – 1976) was one of the last and most powerful of the Twentieth Century urban machine politicians. He ruled Chicago from 1953 until his death. From his urban power base he dominated Illinois state politics, and even swayed Presidents. He’s credited with saving Chicago from the precipitous decline that affected many other Rust Belt cities. But he’s also blamed for keeping Chicago one of the most segregated cities in the nation. 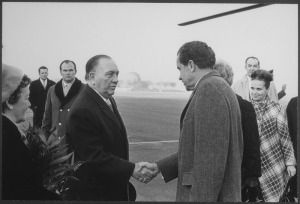 Daley in a favorite role, greeting a President

How did he do it all? Well, it helped that he was mayor of the city from 1955 onward, repeatedly reelected. He enjoyed the title and prestige. But Daley was more about power. He controlled the Democratic machine that ran Chicago.

The machine was essentially a parallel government, the Democratic Party’s apparatus in the wards and precincts. It handed out favors in exchange for votes and campaign contributions. Those favors ranged from getting a new street light put in, to fixing a parking ticket, to handing out jobs regardless of ability. Nominally, Chicago had a civil service exam system for new hires. But the exams were rarely held, and one didn’t need to take the exam if one was a “temporary” employee. Many so-called temporary employees worked for the city for decades. Although how much work they did was another matter. If one had enough political pull, one might never even bother to show up at one’s city job. 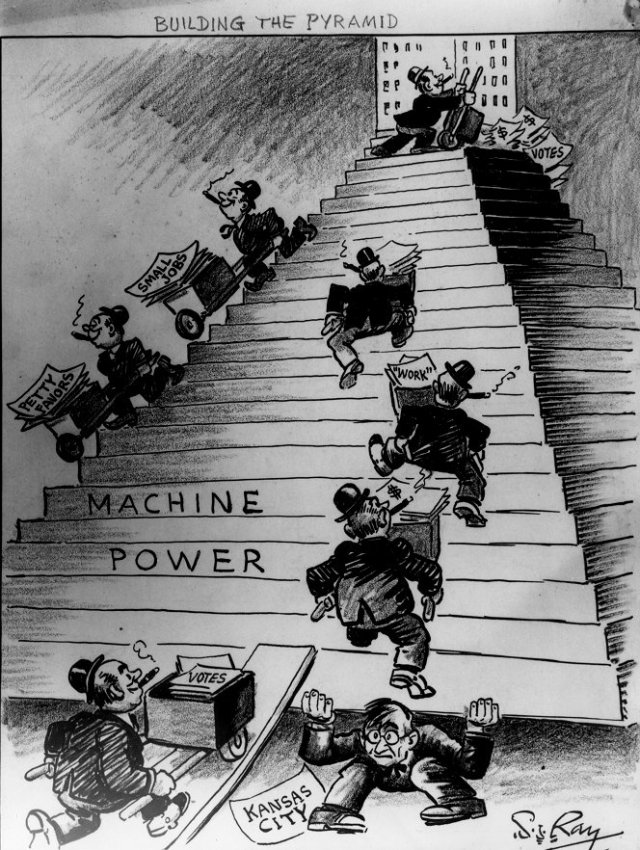 How the machine works

It was corrupt, hopelessly so, essentially so. But before you get worked up in a moral outrage, consider that it’s not too much different from national politics today. Wealthy individuals and organizations make contributions, and expect favors when legislation is being drafted and voted upon. And they get it. You can usually tell which way a member of Congress will vote based on who financed the member’s election. In one respect, the machine was superior to our “officially” clean system: a lot of the perks went to people who weren’t all that well off.

Not that some people higher up in the system didn’t make a bundle from corruption. Many did. Daley doesn’t seem to have been one of them. He was unusually strait-laced for a machine politician. He didn’t get drunk, he didn’t fool around with women other than his wife, and (with one possible exception) didn’t use his position for personal financial profit.

The machine didn’t just control favors. It also controlled who was put on the Democratic primary ballots, which in overwhelmingly Democratic Chicago meant who would win the election. And the number of voters in Chicago was so large that Daley and the machine were often able to take control of the state government. Since Illinois was a swing state with a lot of electoral votes, Presidents and would-be Presidents courted Daley. He showed he could deliver, most famously in 1960 when Chicago votes helped win Illinois for John F. Kennedy, and made him President. If Daley’s machine had to stuff the ballot box to make that victory possible, well, then the President owed him all the more.

Daley’s greatest success was in reviving downtown Chicago, “the Loop,” as it was called, and the nearby neighborhoods. Daley collaborated with the business leaders of downtown, by building the transportation they needed and easing regulations for them, and they responded by building office and retail space in the heart of the city. Unlike many Northern cities, Chicago’s downtown did not fall into decay and did not become a slum district.

But there was a dark side to that downtown revitalization, and it had to do with Chicago’s race problem. Even before Daley took office, the city was almost entirely segregated. Whites used racial covenants to keep blacks out of their neighborhoods. When covenants didn’t work, mob violence would often drive out blacks who dared cross the color line. The black population had grown enormously in recent decades due to migration from the South, but the South Side Black Belt, the old Bronzeville, had barely expanded at all. Despite the best efforts of whites, the Black Belt was expanding, block by painfully converted block.

The Loop’s business people wanted to keep blacks out for fear they’d ruin downtown. The white neighborhoods felt the same way: let one black family in, and all the whites would leave for the further suburbs (“white flight”), and it would become a black slum. The blacks, on the other hand, were desperate for more housing, period, and if it were in the Loop, or in white neighborhoods with better schools, so be it. (And they were better schools: the school system spent more on white neighborhoods per capita than black ones, and they had smaller class sizes, too.)

Daley’s problem was that he needed the business people’s money, and the votes of both the “Bungalow Belt” whites and the South Side blacks to ensure his power. He pursued a policy of paying lip service to integrated public housing, while in practice supporting policies and construction projects that reinforced segregation. For example, it was no coincidence that a major expressway was built to separate the white neighborhoods on the west from the black neighborhoods to the east. The highway served as a formidable barrier. Preserving segregation also preserved the existing power of white and black ward leaders, whose positions might be jeopardized if the color line eroded more quickly.

1968 marked the beginning of the decline of Daley’s power and reputation. He’d weathered challenges to his power and charges of corruption in past. But the riots after Martin Luther King, Jr.’s assassination and at the Democratic National Convention, and the police’s overreaction to the latter, revealed Chicago to be a troubled city. In the November election, Daley wasn’t even able to deliver Illinois for the Democratic Party. The Republican Administration that took power in Washington was more than willing to investigate charges of corruption in Democratic Chicago. Daley and his machine suffered repeated reverses in elections and court rooms, and the press was no longer so fawning as it had once been. Daley himself was older, more tired, and more erratic in his proclamations. Still, despite suffering a serious stroke in 1974, Daley and the machine still clung to power, right up until Daley expired of a massive heart attack in his doctor’s office in 1976.

He served as mayor even longer than his father

Many observers at the time of his death assumed that Chicago’s Democratic machine was in terminal decline when Daley died. But his heirs, including his son Richard M. Daley, have continued to dominate Chicago. And although the situation has improved since 1976, Chicago remains among the most segregated cities in the nation.