Playing at history: your author as George S. Boutwell

This is the real Boutwell 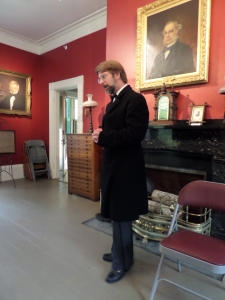 Me as Boutwell in the parlor of his house

I mentioned in my previous post that I’d be spending this last Saturday in my old home town, playing a historical character. The character I was playing was George S. Boutwell (1818 – 1905), who served as a Massachusetts governor, United States Senator, and Secretary of the Treasury during his public career. My focus this time was on his life as a homeowner, gentleman-farmer, and citizen of Groton, Massachusetts, where he had built a home the year he became governor. That home now serves as the town historical society’s headquarters. It had been closed to the public for two years due to water damage from a frozen pipe.

But the society had done a bang-up job restoring it, and we had a nice, comfortably cool day to celebrate its reopening. I dressed up in an outfit similar to the one you see above. Boutwell tended to give speeches that ran over an hour; I managed to hold my audience for fifteen minutes. And then I stayed in character as Boutwell to greet people to “my home,” and answer their questions. As it turned out, people were more likely to ask questions that demanded I break out of the Boutwell persona, and assume my own identity as a historian. So I alternated back and forth between the two roles.

A moment relaxing outdoors, with the old town hall in the background

Historically, Boutwell was serving as Secretary of the Treasury when the first major Japanese diplomatic mission came to the United States. He spent some time advising them, and the banking system they implemented in Japan in the 1870s reflects Boutwell’s advice. The Japanese delegation gave Boutwell and his family several gifts. So when I wrote a fictional letter from Boutwell to his daughter Georgianna to explain the origin of the Japanese walking stick that figures in The Dragon Lady of Stockbridge, I wasn’t stretching the truth very much!

Oh, and there’s one more picture on my other blog, No Humble Opinion.

I enjoy history because it helps me understand people. I'm writing fiction for much the same reason.
View all posts by Brian Bixby →
This entry was posted in Dragon Lady, History and tagged Boutwell, George S. Boutwell, Groton, History, Secretary of the Treasury. Bookmark the permalink.

2 Responses to Playing at history: your author as George S. Boutwell