The magic of Owen Davies 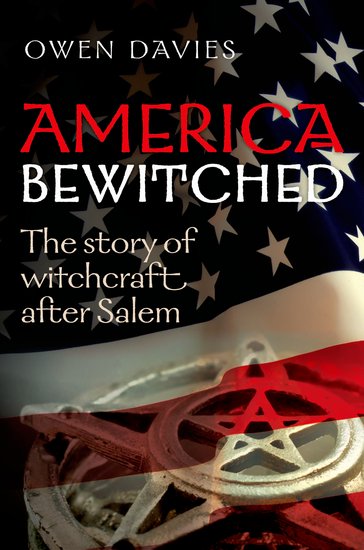 Owen Davies is a U.K.-based scholar who has been writing scholarly and popular books on magic and witchcraft for more than a decade now. I’d only learned about him by reading his Grimoires: A History of Magic Books (2009), which I liked very much. (I even borrowed some information from it as background for my story “The Troubles of the Farnsworths.”) So when I ran across his latest, America Bewitched: The Story of Witchcraft After Salem (Oxford University Press, 2013), I thought I’d fit it into my reading schedule.

If you thought witchcraft persecutions ended after 1692, then Davies’ book will be a shock. Oh, judicial witch killings ended back in colonial days, but people went on killing “witches” in this country well into the Twentieth Century. Davies develops a theory of the social and cultural framework for accusations of witchcraft and their resolutions in the centuries since Salem, offering copious examples in detail. Each chapter sketches out a different aspect: how witches were identified, who persecuted witches, how the law on witchcraft changed, and so on.

In both this book and Grimoires, Davies writes in a popular style. His storytelling ability is a great help in making these books accessible to the general reader (if I am any judge). And the “further readings” provide such readers with many entry points into the scholarship on magic and witchcraft.

Not that there isn’t material here for the scholar. America Bewitched does not confine itself to European-derived witchcraft concepts, but explains how European, African, and Native American beliefs all interacted in the development of witchcraft persecutions, a point well worth emphasizing. The book supports its theoretical analysis with many examples, all extensively referenced. However, the scholar trying to assemble a chronological development of witchcraft persecution is likely to be frustrated both by Davies’ approach and his presentation of the material. A chronological index of cases would have been helpful.

Since I mentioned it and recommend it, here’s the earlier book

Overall, while I enjoyed America Bewitched because of the strong case the book makes for the endurance of witchcraft and witchcraft persecution in America after 1692, I did not like it as well as I liked Grimoires. America Bewitched feels like a much looser book, not as tightly organized or as well edited as Grimoires, as if Davies’ storytelling side got too much the upper hand. I doubt that will bother most readers! And I still intend to track down some of his other books to read.

I enjoy history because it helps me understand people. I'm writing fiction for much the same reason.
View all posts by Brian Bixby →
This entry was posted in History, Reviews and tagged book review, History, Magic, Owen Davies, Reading, witchcraft, witches. Bookmark the permalink.

9 Responses to The magic of Owen Davies