For those of you who don’t already know it, I should mention my girlfriend, E. J. Barnes, is a cartoonist. So she often goes to comic book conventions to sell her wares. Since this involves carrying enough luggage to give a hernia to an elephant, and requires the cartoonist either to not need to use the bathroom or to have a slave to cover for her when she does, I get to be her henchman at many of these affairs. Why, just this weekend, we were at the Boston Comic Con, just across the river in good ole Beantown, U.S.A.

A major comics convention, such as this one, is a mélange of different peoples coming together for what is not actually a common purpose. Comics convention culture embraces other (usually marginal) aspects of popular culture, especially science fiction and fantasy TV series and movies. 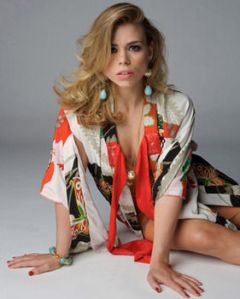 No, Doctor Who is not going sexy; this is Billie Piper as the call girl

Case in point: Billie Piper. Who, you ask. Well, who, indeed. Billie Piper was there because she once played a companion on the BBC fantasy series Doctor Who, where she became so popular and so beloved by the Doctor and fans that she somehow developed supernatural powers in another dimension or something so she could still sort of be of service to the Doctor, instead of, you know, doing the normal human thing and having sex with him, usually a no-no in Doctor Who. (Which may explain why she next starred in Secret Diary of a Call Girl.) Well, she was at the convention signing autographs and having her picture taken with the fans for $60 a pop. This is standard procedure at comics conventions, where you’re likely to see a lineup of present-day and has-been celebrities cropping up to capitalize on their moment in the sun or the glow of nostalgia. I remember seeing James Doohan of Star Trek at one convention in his last years of life. For that matter, I’ve seen Tanya Roberts of Charlie’s Angels show up at one, which shows you how elastic the definition of comics convention culture can be.

Some merchandise at this year’s con
(Photo: Boston Globe)

But celebrities are not the only people in attendance. There are the major comic book publishers, and sometimes the media companies that own them, trying to heighten interest in their present and future wares. There are the stores and dealers, who sell present-day and old comics as well as merchandise. Want to buy a Dalek toy from Doctor Who? There are zillions of them at cons these days.

Then there are the customers, the fans. It is surprising just how many there are. It’s also surprising just how much money they will spend to buy stuff, whether it be comics, videos, merchandise, a chance to get the autograph of a beloved celebrity . . . or art work about all these things.

A scene from last year’s con

There’s a whole section of the conventions called “artists’ alley” where artists hawk wares ranging from their own superhero comic books to (often unauthorized) art featuring comics culture heroes, or even drawing you as a costumed hero. Some of these artists are big names, who are steadily employed by the major publishers, and do this for publicity, fan relations, and to pick up a few bucks. The majority are struggling artists who hope to “make table” and then some while trying to make a career out of their talents.

One of the sad aspects of artists’ alley is that there are a lot of talented artists there, who are trapped into doing superhero or other pop culture art because that’s what sells. Not that they all hate it; many started as fans trying to realize their own vision of these characters, and are happy to keep doing so. But it seems such a waste to see so many artists working in such a limited range. I often wish I could free the more talented ones to pursue their own visions. And suggest to the least talented ones not to get their hopes up. 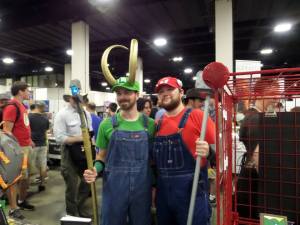 Just like sci-fi/fantasy conventions, one of the attractions is cosplay, fans dressing up in costume as their favorite characters, both to compete and to just have fun being someone else for a few days. This is the part of any comics convention that gets the most media play (outside of San Diego’s Comic-Con, which is the biggest of all). You can tell a lot about contemporary pop culture by which costumes show up the most. I remember over a decade ago that conventions swarmed with teenage girls dressed in camisoles in tribute to Buffy the Vampire Slayer. This year, E.J. noted a great many women wearing red hats and blue suits, which suggests that Agent Carter, a Marvel-related TV series, has a firm fan base. I noticed a large number of women apparently portraying Daenerys Targaryen, the “mother of dragons” from Game of Thrones. And there were a fair number of females dressed up as Poison Ivy or Harley Quinn, two villains from the Batman franchise. I didn’t notice any particular trend among males, except perhaps a few more incarnations of the Doctor from Doctor Who. But I admit this may be because female cosplayers often show a lot of skin, and that sometimes distracts me. (WARNING: conventions have strict “do not harass the cosplayers” rules for that very reason.)

E.J. had a table in artists’ alley. The table to her right had a woman who professionally does fan art, often by “mash-ups” of characters from multiple sources. The table to the left was held down by a man who writes superhero novels for the young adult market. Most of the people across from her table were people doing fan art, as I say, often of impressive quality.

You might wonder what E.J. is doing at this kind of show. Her comic books these days tend to historical themes (not just due to my evil influence). That’s an ongoing problem for her and other artists like her who don’t do superhero comics, trying to find the right venue. E.J. does comics shows, craft shows, and small press shows, as well as being a panelist at a sci-fi/fantasy convention. None is a perfect fit for her talents and work. Still, a big show like Boston Comic Con brings in so many fans that she’s sure to snag the interest of a few. They may not have come to the con for a comic portraying a satirical poem by Jonathan Swift, but they may end up buying one once they see it. And this year she added commissioned portraits as a service to customers. Unlike many artists, who will portray you with or as a superhero, E.J. would produce a colored pencil drawing of your face on a famous work of art. Want to be the face of the Mona Lisa? Or be portrayed as Lord Byron? She got several customers, each of whom picked a different work of art.

All henchmen model themselves on the best: Young Frankenstein’s Igor

My job at these conventions is to be a henchman. (I prefer “art enabler,” but that involves a pay raise and health insurance benefits, so it ain’t coming soon.) I help set up and take down, get her beverages, cover the table when she needs to take a break, and assist her in making her pitch to customers or handling the money while she signs the book. There are a few things I can’t do for E.J., such as bathroom breaks. And while E.J. can ask passing girls ages 4-12 if they’re interested in comics and want to read a comic about a lady astronomer (Caroline’s Catalog), I don’t do that out of fear of being viewed as a child molester if I tried.

Comics conventions often run Friday through Sunday, from late morning to early evening. It can be fun. It can be tiring. Friday usually has a rush when the convention begins, and then after 5 when people get off their regular jobs. Saturdays are typically the busiest days. Sundays tend to be lackadaisical. Often the artists will spend much of the afternoon talking to each other and swapping books, rather than stay chained yet one more day to their tables attending the few customers circulating around. Boston Comic Con never got that quiet Sunday. So it was with a great sigh of relief that we closed up after 6 P.M. and rode the MBTA home. It was time for a beer.