The arrival of summer 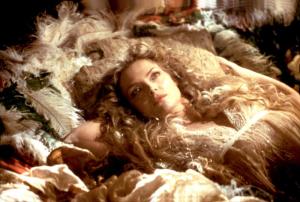 People argue about when summer begins. Is it when school lets out? Memorial Day? The summer solstice? The Fourth of July? No doubt in other parts of the world (especially in the southern hemisphere!), other dates are considered as well.

For me, the summer begins the evening of June 23: Midsummer Night’s Eve. For many years, I have sat down with a potable beverage and a copy of Shakespeare’s play, A Midsummer Night’s Dream.  This year, I joined a group reading while drinking a bottle of hard cider. It was an appropriate choice: summer should be about nature and living things, and cider connects us to apples and orchards, one of the characteristic landscapes of New England, where I live.

Merlin had to have been beguiled in the summer!

Summer is the proper time for magic and fantasy. Hot, warm, lazy days, followed by nights when one can stroll about without needing a coat: it’s a time to be outdoors. The mind can drift where it might, mixing the trivial and the profound, the ordinary with the wondrous. The “Twilight Time” segment of the Moody Blues’ Days of Future Passed album captures the mood.

As a child, I spent summers watching lightning storms over a lake, wondering if I’d encounter Mary Stewart’s version of Merlin emerging out of some small thicket, sitting in a spruce tree far above everyone else while reading a book, or traveling on my bicycle to a state park with that great wonder, a waterfall!

The year I turned eighteen, the summer ended with a great transition: I went off to college, living away from home for the first time. There was magic at the end of that summer, the promise of adventures to come, a future opening up before me, and even a song about a “magic man” to listen to on the radio. 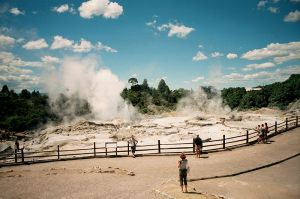 The landscape in the thermally active region is simply weird.
Credit: Wikipedia/Carl Lindberg)

As an adult, I once turned winter into summer. I went off on a vacation to New Zealand in February. I saw another country’s wonders. I hiked through a rain forest, visited thermal springs, and climbed a volcano, all the while reading of Maori legends and imagining other fantastic adventures. (There’s even a story on this blog that was an offshoot of that trip.) True, I never imagined someone filming Lord of the Rings there, but that has added yet another layer of magic in retrospect to the trip.

Most of us tend to lose much of our sense of wonder, of adventure, and of magic, as we grow older. I’ve been feeling it ebb myself for some years. Prosaic reality seems relentless. But this summer, I’ve decided it is time to recreate some of that old magic and fantasy. Exactly how, I’m not yet sure. But stick around the blog, and I’ll let you all know how it turns out!

I enjoy history because it helps me understand people. I'm writing fiction for much the same reason.
View all posts by Brian Bixby →
This entry was posted in Uncategorized and tagged A Midsummer Night's Dream, Magic, Magic Man, Moody Blues, New Zealand, Shakespeare, summer. Bookmark the permalink.

12 Responses to The arrival of summer