The story so far: Tollon has gathered some friends and returned to the school he once attended, where the vanishing sickness has made off with everyone but a single instructor. Now read on . . .

Honorable Alesca Alencar comes to the door of the chapel when I knock. She’s happy to see me. “Little Tollon!” she exclaims. And then she looks at the women behind me, and observes, “You’ve collected quite a harem.”

In a voice loud enough to be heard in town, Jallia says, “I’m his sister.” She’s clearly upset by being included in my ‘harem.’

I’m tempted to laugh, after all the ribbing I’ve been taking about Katrina and me, but I don’t want to make matters worse. Instead, I try to smooth things over. “Honorable Alesca Alencar, may I introduce my associates: the gifted Jallia, my sister, Mia, a fairy, and Katrina of Moss, a skilled warrior. Each has her own talents and powers, which when combined we hope will prove able to get the students and teachers back, and also prevent a major catastrophe. And ladies, may I present to you Honorable Alencar, who is a learned lady and resourceful individual.”

Everyone is suitably impressed. We go into the chapel. Honorable Alencar has managed to rig up a grill near a window, and cooks us up a solid meal before we settle down to talk.

Mia takes the initiative. “Tollon told me one of your fellow instructors came back long enough to say something like ‘Ovad.’ I think he was trying to say ‘Ovedisca.’ Could that be?”

Honorable Alescar ponders before answering. “It could be. I was surprised at the time, and he did seem to be cut off mid-syllable. What does ‘Ovedisca’ describe or name?”

“A wisely chosen refuge,” Mia replies. “For Thessar and Ovedisca have quarreled since they were young and the worlds were created.” 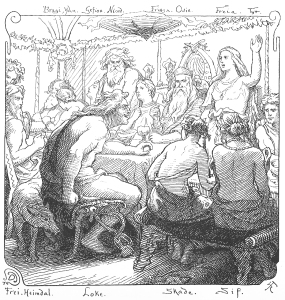 Gods love quarreling. Here’s a famous quarrel in Asgard, from the Elder Edda.

Mia sits back and stares up at the ceiling as she speaks. Her voice is clear and distinct, but it sounds as if it were coming from a great distance away. “Before your race was created, when we of the fae were the only civilized race, the gods created the worlds. And then, as gods do, they fell to quarreling over what to do with the worlds.” She leans forward and smiles at us. “For, you see, the gods are not really civilized. Neither is your race, but you are more civilized than the gods.” She leans back and stares at the ceiling again. “The gods quarreled. Ovedisca hated Thessar for her leading role in creating the worlds, including the fae. So Ovedisca took some of the worlds, and some of the fae, and hid them from Thessar. We of the fae call this the ‘Division of the Spheres,’ for never since have we known the fate of our kin on the worlds Ovedisca hid.

“This did not content Ovedisca. He has raided Thessar’s worlds ever since. What you call the vanishing sickness is just such a raid. Your people have been carried off to one of Ovedisca’s worlds. What has happened to them since then, we cannot say.

“This Honorable Strunstur who was briefly able to return, what was he?” Mia asks Honorable Alencar.

“Why, a teacher of languages,” the learned lady replies.

“Oh, wait,” interrupts Honorable Alencar. “He did have a side hobby of thaumaturgy. Brasson, our best metaphysician, was impressed with some of his skills.”

“Ah.” Mia offers a small smile. “That makes more sense. We may hope he left us other clues, which we can follow back to Ovedisca’s worlds. And we had best hope so, for once Ovedisca begins such raids, he normally continues them for some time. Your Kingdom of Auspulia will suffer first. But Ovedisca is greedy, and will extend his raids into other lands, yea, even into the Land of the Fae. We must find a way to stop him before the vanishing sickness devastates our world again.”

I enjoy history because it helps me understand people. I'm writing fiction for much the same reason.
View all posts by Brian Bixby →
This entry was posted in Magician's Apprentice, Writing fiction and tagged fantasy, Fiction, Magic, quarreling gods, Writing. Bookmark the permalink.