The story so far: After slaying two dragons and getting caught up in a fight between gods, Tollon has returned to the palace to find himself caught up in political intrigue again. But this time, he’s pushing back. Now read on . . .

I dig up one of my more disreputable clothing ensembles. It makes me look like a laborer. And then I strap on my Etralstan sword, which looks very out of place. That’s the point. I want the locals to realize that I’m telling them I’m not one of them, just passing for one of them. Because my destination is Gehulia. Gehulia, the roughest district in the city, where I was ambushed by Zilla once before. Only, this time, Zilla isn’t going to ambush me. 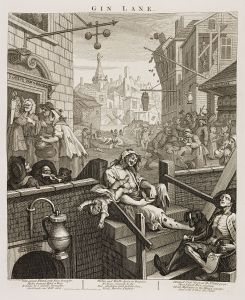 The residents of Gehulia would find Hogarth’s Gin Lane familiar.

I leave the palace, head toward Gehulia, and make for its main thoroughfare of bars. I turn into the disreputable one I visited last: Herkan’s Hangman, a combination tavern, inn, whorehouse, fencing operation, and drug dealership. I believe they contract out murders. I take my place at the bar, order the most expensive whiskey there (“Old Zombie Face”), and wait.

The bartender, a man who looks like he’d be at home in a torture chamber, keeps staring at me. When I finish my first drink, he comes over and asks, “Get you another, sir?”

“Yes, and a woman to go with it. I was here a few months ago. The woman I was with was disappointed with my performance. I don’t remember hers. She showed me the back way out when I told her I was a political criminal. Go find her. I want her here before I finish my next drink.”

He looks unhappy as he pours my drink and then goes to confer with someone at the other end of the bar. A few minutes later, a nondescript man carrying a knife in his hand sits down beside me. Without actually looking at me, he says, “This is a rough place, mate. You might just want to stroll along.”

Without looking at him, I say, “I killed the god who killed Katrina of Moss. Now, I haven’t drawn a weapon in here, yet. I’m looking for a woman. If she shows up, no one gets hurt, not even her.” And I ignore him and work on my drink.

He goes away. The next person to occupy that stool is a woman. It’s her. I look her in the eye. She is scared of me. Good. I tell her, “Thanks for the escape last time.” I pull out a silver regia piece, plunk it in front of her. “Your payment. Now, I’m going out to the Vaskivin Trough to sit a bit. Find me Zilla, and there’s another one of those in it for you.”

She eyes the coin. “I don’t know any Zilla,” she lies to me.

I shrug. “Then someone else will be the richer.” I get up and leave, ignoring her attempts to talk to me again. I travel over a few blocks to the Vaskivin Trough. It sits in the middle of a square, with a small park, and there are many benches in the square. It’s a popular spot.

I give Zilla two hours tops to show up. It’s the lesser part of an hour before she does. At least she does it in style. One moment there is no one sitting beside me. The next moment, there is.

I look at her. She cackles at me. “So, it’s Sarton’s whelp. You promised the whore money.”

“That I did,” I reply. I pull out another silver regia piece, place it in Zilla’s palm. “See that she gets it. And while we’re at it, I’m not Sarton’s whelp anymore, and don’t you get tired of that eccentric old witch routine?”

She cackles. And then, before my eyes, she transforms. Instead of a withered old woman, she actually becomes an attractive middle-aged woman. Her red skin loses its wrinkles, and her black hair actually shines. She asks me, “Did you really kill a god?”

“I was possessed by another god at the time, but, yes,” I tell her.

“That’s impressive enough. So, what do you want, Tollon of Velgard?”

Her eyes twinkle. “Tell me more.”

I enjoy history because it helps me understand people. I'm writing fiction for much the same reason.
View all posts by Brian Bixby →
This entry was posted in Magician's Apprentice, Writing fiction and tagged fantasy, Fiction, Magic, tavern, Writing. Bookmark the permalink.