The story so far: While at a royal audience, the queen went mad in front of Tollon and fell into labor. Tollon and Sarton have been placed under guard. Now read on . . .

We’re summoned to the king’s private office about three hours later. In a good sign, he dismisses the guards and has his servant offer us chairs and drinks. “I hope there are no hard feelings about this,” is his opening line.

I defer to Sarton, who says, “How is the queen?”

So far, the king has kept up an impassive front. Now he lets his feelings show. He shakes his head, a sorrowful look on his face, and slumps in his chair. Looking down, not at us, he says, “She’s in the most dreadful labor, curses everyone who comes within her sight, and announced her unchastity, past and future, loud enough to be heard outside the palace.” He looks up at me, then to Sarton. “Send your boy away. We need to talk confidentially.”

Sarton demurs. “We both know what this is about, Your Excellency. It’s about whether someone has practiced magic on the queen. And whether the child she carries is yours. In short, the fate of the kingdom. My colleague has my trust. I’ll stand responsible for his actions.”

The king looks dubiously at me. I figure I have to take a stand. “The queen’s madness began when she spoke to me. I’d have to be an idiot to have set myself up as so obvious a suspect. I’ll ask no man to take responsibility for my actions. I have reason enough of my own for wanting to get to the bottom of this.”

The king ruefully nods. “In truth, I do not think either of you responsible. The timing was too obviously chosen to throw suspicion on you.” He looks over to Sarton. “Your recommendations?”

Sarton and I were talking this over while we were under guard. So Sarton is ready with answers. “We can determine whether there is a spell on your lady. We cannot determine who put that spell on her. As for the paternity of the child, you already know who is responsible.”

The king does not reply at first. And then he seems to crumble even more. “Aye.” He looks down, not meeting our eyes. “I knew. I hoped fate would save me. It seems I must save myself.” He stands up and paces around the room. He returns to his seat, and looks to the both of us. “The queen has ruled while I have reigned. Now I must rule for the both of us. It will not be easy.” He smiles at us. “You are lucky, Sarton, to acquire an associate at such a time. Do what you can for the queen. I will give orders to that effect.”

And with that, the king gets up and leaves.

Three hours later, I return to Sarton’s workshop, to see him pacing the floor. Even before I take off my ceremonial robes, he asks, “What did you find?” 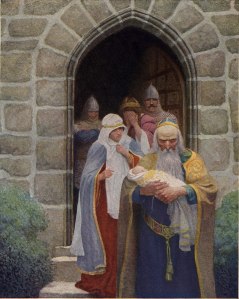 I give him a crooked smile. Sarton is not used to playing second fiddle, but after hearing how the queen was behaving, we decided it was safer if I alone saw her. I sit down and tell him. “Well, the queen spent her time either screaming with labor pains or suggesting how I should have sex with her. In other words, she’s completely out of her mind.” And then some. I’d never seen a woman give birth before, but I’m pretty sure most of them aren’t trying to seduce a man in the room while it’s happening. “Somebody’s put a spell on her. The child is a boy. And I couldn’t get close enough to tell for certain, but I think the child is bespelled, too. I don’t think it will live out the tenday. And, rumor has it the king’s child was born about the same time.”

Sarton’s expression is grim. “It’s true. I was observing from here. The two children were born at the exact same time. Lady Gwella has done her work well.”

I start to ask Sarton for an explanation, but there’s a knock at the door. It’s a messenger from Lady Gwella, asking me to pay her a call. And while the invitation is couched in polite phrases, there’s no mistaking the implication of its wording: I refuse at my peril.

I enjoy history because it helps me understand people. I'm writing fiction for much the same reason.
View all posts by Brian Bixby →
This entry was posted in Magician's Apprentice, Writing fiction and tagged court intrigue, fantasy, Fiction, Magic, Writing. Bookmark the permalink.