The story so far: In search of the mysterious Chypa the Stranger, Tollon and Inacha find themselves taking on the role of performing artists before the prince of Tanafisay. Now read on . . .

The prince admires Inacha before addressing me, “I am not familiar with Marsgoland. Where is it?”

“Your Serenity, for that is how I would address you among my people, for rulers bring peace, and, alas, we are too oft’ afflicted by war, it is beyond the Narthavian Mountains, which shut us off from the blessings of trade with this part of the world. I had the help of fourteen of the barbarous natives, and yet lost all the members of my party save Inacha in the crossing of them. For the trails were narrow and perilous, the beasts sly and fierce, and the White Death, oh, it is not to be spoken of in front of women. Inacha, who slew a mountain cat, was stricken mad at seeing its victims, and recovered only by forgetting everything, even her name.” I lay this on with the thickest version of my native accent I can manage.

The Mistress of the Robes, who once again looks bored, looks at me with half-lidded eyes as she observes, “It must be a queer place, this Marsgoland. For the people there speak just like a native of the hill country of Auspulia.”

Yikes! How does she happen to know my accent?

Inacha interjects, “How perceptive of Your Ladyship. We sojourned there last year, talking with that land’s bards. For my master is not just a creator and reciter, but a scholar.” She looks at me pityingly. “He studies so hard to get the accent right, and then can’t shake it for months or even years after.”

The Mistress is not finished with me. She asks, “Did you master the tracka?”

The what? “Your Ladyship, it is no longer played.”

She shrugs, closes her eyes, and sighs. “A pity. I always wanted to see how a pig’s bladder can make music.” A wave of tittering sweeps the room.

The prince takes control. “So, what have you for us? And will your lovely assistant dance for us?”

“Your Serenity, we will perform a duet. Alas, my assistant has not been able to dance since her mind was upset by the White Death.” Which is to say we had not planned on her dancing, and I don’t know if she can.

Inacha has other ideas. “Your Serenity, my master fears for your well-being. Ladies of Marsgoland are trained in dancing even in the womb, and our arts have driven men to obsession and even madness. But Your Serenity strikes me as a man of unusual wisdom, who may watch safely. Your subjects,” she makes a sweeping gesture, “may not be so fortunate.”

What has gotten into the woman? Doesn’t she realize the prince will order her to dance now? Which he does. “I will see you dance, lady. My subjects can take their chances.”

I am about to protest, when Inacha fixes me with a look. She has something in mind. Well, we were advised to be showy. Here goes. “This is the tale of the Champion of Marsgoland.” And we begin.

The story we’re telling is something we cobbled together out of some famous Auspulian plays. We structured it as a dialogue between the Champion and the lady he is romancing. In the best story-telling fashion, there are numerous repetitive lines, which makes recovering from a slip of the memory quite easy. 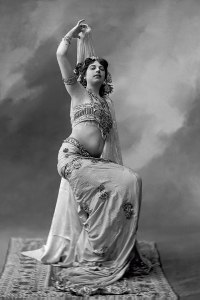 Some dancers can even cause men to betray their countries

Inacha surprises me. At first, we both just stand. And then, during one of my pieces, she begins moving. It doesn’t look like dancing, not at first. And then she switches styles and her movements become more fluid when it’s her turn to recite. As we progress, I gradually see what she’s doing. She’s developing two different styles of dance, one to represent the Champion, the other his lover. The Champion’s dancing evokes his strength. While his lover’s dancing is increasingly seductive. Before we’re even half way through, all eyes are on Inacha. I have trouble taking my own off her. As I pick up her gestures for the Champion, I begin making them myself when it is my turn. And so our song becomes a duet of dancing as well. When Inacha throws herself into my arms at the end, my kiss is genuinely passionate. For a moment, I forget where we are and what we’re about.

We separate and take our bows. The prince still seems mesmerized by Inacha. And then he regains awareness of his place. He comes down from his throne, takes Inacha’s hand, and kisses it. He looks at us both with a smile. “Well done, bard. You shall both be appropriately rewarded for such a marvelous performance.” He walks back to his throne, sits, summons the steward, gives him instructions. He then says to me, “My steward will see to your needs. Again, my congratulations on such a stunning performance.”

We’re dismissed and led out of the audience chamber into a side corridor. The next thing I know, I’m sprawling on the floor from a massive blow. Someone’s kneeling on me. And I head Inacha screaming.

I enjoy history because it helps me understand people. I'm writing fiction for much the same reason.
View all posts by Brian Bixby →
This entry was posted in Magician's Apprentice, Writing fiction and tagged bard, dancer, fantasy, Fiction, Writing. Bookmark the permalink.