A whole new chapter of The Dragon Lady of Stockbridge is up on my blog this morning. The heat is on in chapter 8, “Allies and enemies,” as Rebecca struggles to deal with the consequences of the literally smashing conclusion to the previous chapter. Read all about it here, or, if you’re just joining the story, you can start from the beginning here.

This chapter includes an appearance by Rev. Henry Martyn Field (1822 – 1907), an unusual man in a notable family. His father was a prominent Congregational minister and local historian. One of his brothers was a noted legal reformer, another was a Supreme Court Justice, and yet another laid the first successful trans-Atlantic telegraph cable. Henry was no slouch, either. He was a minister himself, and long-time editor of a religious periodical. He chronicled the doings of his family and became a noted travel writer in his own right. 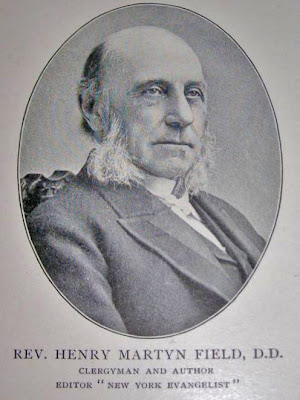 In a strange quirk of fate, Henry is best remembered today for something his first wife supposedly didn’t do. Henriette Deluzy-Desportes was the governess to the children of the Duc de Praslin. The Duke bludgeoned his wife to death, and then committed suicide rather than be tried by his peers in the French Senate. It was alleged that the Duke had fallen in love with Henriette, and she had been his mistress, something she of course denied. Although she was a decade his senior, Henry married her not long afterward, and she went to live with him in Stockbridge, trying to escape her Parisian notoriety. (She died in the 1870s, and Henry had remarried by the time of the events in Dragon Lady.) Henry’s grand-niece, Rachel Field, wrote a fictionalized version of the scandal in 1938, entitled All This and Heaven, Too. It was a best seller, and was made into a Hollywood movie only two years later, starring Bette Davis as Henriette. An actor playing Henry briefly appears in the film to rescue Henriette from despair and offer to take her to America as his wife.

I have to wonder at Rachel Field for writing All This and Heaven, Too. I can understand why she, as a family member, would consider herself the author most entitled to tell the story. And the story itself is irresistible melodrama. But did she not understand that, no matter how she depicted Henriette, she was reviving an old scandal in her family? Or did she just decide that since all the people involved had been dead for decades that it didn’t matter?

I enjoy history because it helps me understand people. I'm writing fiction for much the same reason.
View all posts by Brian Bixby →
This entry was posted in Dragon Lady, History, Writing fiction and tagged Berkshires, Fiction, History, Magic, Science fiction, Writing. Bookmark the permalink.