I’ve already written about the dangers of using magic in fiction. This week, I’m going to write about the magic that I do use in my fiction, particularly in The Dragon Lady of Stockbridge, which is going up, chapter by chapter, every week.

My long-ago inspiration for using magic was a 1953 novel by Fritz Leiber entitled Conjure Wife. Unlike many writers, Leiber spelled out the basics of magic in his story. He showed how magic might function as an orderly system. Leiber’s use of magic is structured around three principles. First, every woman on the planet practices magic, but no men do. Second, despite this prevalence of magic, the world still looks very much like our own. Third, the magic itself operated by rules. In the novel, Leiber actually has one of the characters analyze a collection of related spells using symbolic logic to establish the fundamental magical spell underlying all the variations.

Two of these principles I carried over into Dragon Lady: that the world would seem normal, and that magic operates by rules. So in Dragon Lady there are folk stories about witches and magic, but educated people by and large do not believe in them. This places constraints on the magic in Dragon Lady. For example, magicians are not going around threatening to destroy the universe or turning the Washington Monument into gold. There’s a limit to their power. That’s one of the rules. One of the other rules is that performing magic requires energy and has consequences. If you’ve read the story, you’ll have noticed that Rebecca finds it easier to use magic on people to get them to do things they were inclined to do, anyhow, and that major magical operations tire her out. Finally, there can’t be that many magicians in the world, or their existence would be common knowledge. Some people know about them. In fact, some people in government definitely know about them, or there would be no United States Secret Service, Office of Occult Affairs to which Abigail Lane belongs. (Why is the Office of Occult Affairs in the Secret Service, whose main job is busting counterfeiters? Well, why is Presidential protection a duty of the Secret Service? It has to do with history.)

One of the rules I did not carry over from Conjure Wife is the idea that only women engage in magic. Why not? Leiber was writing specifically about gender relations in his day, 1953. My purpose in writing Dragon Lady is different. To me, it seemed unrealistic that men, who hold so much power in the world, could be completely shut out from a system of power. In the world of Dragon Lady, men and women both practice magic, and there is no clear domination by one or the other, except insofar as men tend to hold the reins of power generally. Abigail’s boss, the head of the Office of Occult Affairs, is a man, and no one would even consider appointing a woman to that post in 1886.

There’s one other rule about magic, or at least about magicians, that applies to the world of Dragon Lady. People learn. Magicians learn. They try out new things. They test the limits of their powers. Admittedly, they may make mistakes and be killed by hostile magical entities, or fall victim to other hazards unique to their profession. But over time, magicians get better at magic. Magic is no static institution in the world of Dragon Lady, but an evolving set of practices magicians use to control their world. And just as men and women have developed theories about how the physical world works, which we call science, so, too, someday may magicians develop a theory about how the magical world works. And we’ll call that science, too.

What are the spiritual implications of this? If magic becomes scientific, are we ruling out religion or values? No, no more than science does so already. The great spiritual questions are about our relationship to ourselves, to other sentient beings, and to the cosmos. Science has clarified those questions in certain ways, not answered them. A science of magic would do much the same. Indeed, because it would expose a new realm in the world, and provide a new perspective and new knowledge of ourselves, it would enrich our ability to address those questions.

The alchemists used physical instruments and spiritual exercises to try to realize the Philosopher’s Stone. They saw no firm dividing line between the two. In the world of Dragon Lady, that dividing line does not exist, either. Scientists and magicians are both trying to manipulate the world using their respective skills, but both are trying to answer the great questions. Who are we? Why are we here? And what should we aspire to become? 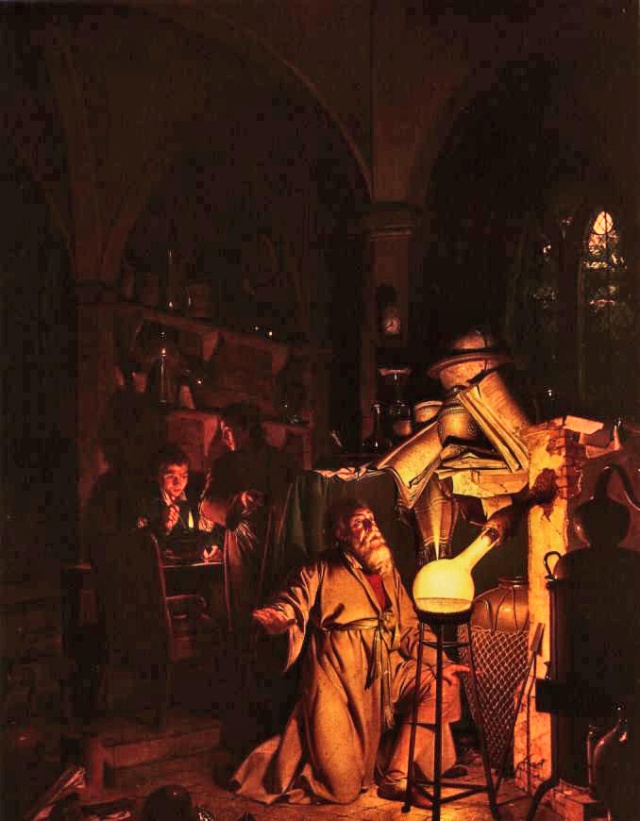 The Alchemist in Search of the Philosopher’s Stone (Joseph Wright, 1771)

I enjoy history because it helps me understand people. I'm writing fiction for much the same reason.
View all posts by Brian Bixby →
This entry was posted in Dragon Lady, History, Writing fiction and tagged Fiction, Magic, philosophy, Writing. Bookmark the permalink.

7 Responses to Magic in Dragon Lady