In Martha’s Children, Martha and her fellow vampires end up in a war with the Chicago cops when they come to that city for the 1968 Democratic National Convention. Their experience resembles that of many of the people who came to Chicago that summer. For Chicago was a city at war, hosting a political party torn apart by a war. 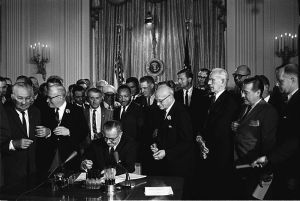 It wasn’t supposed to be that way. At the beginning of 1968, Chicago and the Democrats were sitting pretty. Mayor Richard Daley and his Democratic political machine ran the city, and were looking forward to hosting a political convention, at which Daley expected to play a role befitting a man of his political stature. And the Democrats, firmly in control of Congress, expected to rubber stamp the renomination of President Lyndon Baines Johnson for another term, and cruise to victory in November. Good times all around. 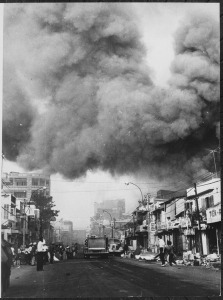 But LBJ was engaged in a two-front political war. In those days, the conservative Democrats dominated the Old South, while moderate and liberal Democrats won the support of labor unions and cities in the North. Though a Texan himself, LBJ had pushed through major civil rights legislation, alienating the segregation-minded Southerners. And his escalation of the Vietnam War had aligned some liberals against him.

The enemy’s Tet Offensive in January, 1968 discredited the Administration’s claim that the United States was winning in Vietnam. On March 12, Eugene McCarthy, running as a peace candidate, won 42% of the vote in the Democratic primary in New Hampshire. Robert “Bobby” Kennedy, brother to the President assassinated in 1963, entered the race also as a peace candidate a few days later. Realizing he could not succeed as President and hold his party together, LBJ announced his withdrawal from the race on March 31.

The Democratic party split three ways, with Kennedy and McCarthy squabbling over who would lead the left, George Wallace advancing as the segregationist candidate of the right, and LBJ’s Vice President, Hubert Humphrey, historically a party liberal, fighting to hold the party machinery and center together.

The assassination of Martin Luther King, Jr., the powerful black spokesman for peaceful integration, on April 4, dashed black hopes and led to riots in most major cities, including Chicago. Mayor Daley called in the National Guard to help his police crush the riots, even telling them to “shoot to kill” suspected arsonists and looters. (There was a lot of argument after the fact whether Daley had given such an order. But it reflects his general attitude.) And then just as he had won the California primary and was about to unify the peace wing of the party, Bobby Kennedy was assassinated on June 5. The left wing of the party fell into chaos, feeling it had been cheated of a chance to win the nomination.

Finally, to top off the witch’s brew, the Yippies, a radical political movement whose name was a play on the term “hippie,” decided to hold their political convention, at which they nominated a pig for President, in Chicago at the same time as the Democratic convention. Several other radical movements decided to show up in force as well, many to protest LBJ’s Vietnam war policy. Daley, who regarded any protest as a blot on his city’s honor, ordered his police to use massive force to crush any demonstrations that threatened the Democratic convention, or public order generally, and called in the National Guard to help. He had crushed the riots after Martin Luther King’s death. He would crush these, too.

The result was a running street battle that lasted throughout the Democratic convention, and even sometimes spilled over into the convention hall. Perhaps 10,000 protesters confronted the police, day after day, night after night, trying to hold demonstrations while living on the streets and in the parks. And the police pushed back, with riot gear, clubs, and tear gas. The conflict reached a climax on August 28, the day of the “police riot,” when so much tear gas was deployed, it even made its way into the hotel where Hubert Humphrey was showering. And it was all on television, shocking the American people.

There’s no way to show the mess and violence of those days in a single picture. There are many videos on the web, though I wasn’t able to find one that told the story well and in brief. Here’s one of them, more of an Establishment take than many, showing two episodes of demonstrations in the street bracketing an episode in the convention of the police removing a delegate: http://www.c-spanvideo.org/program/74510-1

Although the majority of Americans supported the police against the demonstrators, the violence left a lasting legacy. The following year would see the radicals return to Chicago for the “Days of Rage,” and later that year the Chicago police would shoot down the city’s Black Panther leader. Chicago would continue to be plagued with political and racial violence for years to come.

Nor did Hubert Humphrey do any better. Although he had won the nomination, the peace faction of the party never accepted him. The Southern conservatives went a step further and bolted the party to form a third party under George Wallace. Republican nominee Richard Nixon, running as a centrist claiming he had a secret plan to end the war, was the beneficiary of the split among Democrats, winning the election with only 43% of the popular vote.

6 Responses to Chicago 1968: politics as riot