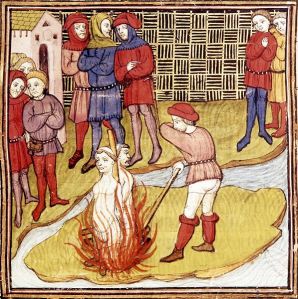 The burning of the Templars

Today marks the 699th anniversary of one of the major steps in the destruction of the Knights Templar: the burning of the last Grand Master, Jacques de Molay, as a relapsed heretic. It was one of the last acts in the downfall of the Templars, but also one of the first steps in constructing a legend about them. 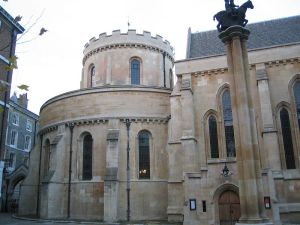 The Knights Templar were a monastic order formed around 1119 to protect pilgrims in the Holy Land in the aftermath of the first Crusades. Their mission quickly expanded to actively fighting the Saracens. The Templars became a popular order and received many charitable gifts. To manage their wealth, and finance their wars in the Holy Land, they gradually developing a banking network across Catholic Europe. Unfortunately, their great wealth could not redeem their military failures, and along with the other Crusaders and monastic knights the Templars were driven from the Holy Land by 1291. The greedy King of France, Philip IV, in debt to the Templars, coerced Pope Clement V into helping him destroy the Templars on the grounds of heresy. The order was dissolved in 1312. De Molay, who had confessed under torture, recanted his confession, and was officially executed for doing so. And that, more or less, was the end of the Templars in fact.

De Molay being interrogated. Note the presence of instruments to imply torture.

But it was the start of the legend of the Templars. De Molay was said to have proclaimed his innocence at the pyre, and said that God would call the Pope and the King of France to account for their sins. And both died within the year! The confessions of the Templars were interpreted to show they had secured some great relic of supernatural power, and that they had been engaged in witchcraft or diabolism. And people wondered where the great wealth of the Templar order had gone to.

The process by which these legends developed was long and complicated. By the 18th century, de Molay and the Templars had been incorporated into Masonic mythology, such that there is a Masonic order of Knights Templar, and a boy’s order named after de Molay. The Holy Grail had been connected to the Templars by the early 19th century. It would take the 20th century to add space aliens.

But why the Templars? How have they become the focus of so much mysticism and occultism? Certainly the suddenness by which the Order was suppressed, and the more fantastic elements of the confessions extorted under torture from the Templars gave them a shady reputation in the 14th century. They proved handy when 18th century seekers for  spiritual knowledge went looking for noble precedents. And that’s much akin to their role today, as dubious keepers of ancient spiritual wisdom in a hopelessly mundane and unsatisfying world.

As mythical models, the Templars might serve to help people visualize and act on their spiritual goals. But as historical figures, the Templars were ultimately failures, militarily, politically, and spiritually. People looking for spiritual enlightenment deserve better.

I enjoy history because it helps me understand people. I'm writing fiction for much the same reason.
View all posts by Brian Bixby →
This entry was posted in History and tagged fantasy, heresy, History, Jacques de Molay, Magic, politics, religion, spirituality, Templars. Bookmark the permalink.

5 Responses to The end of the Knights Templar, 1314