Just saw the news this morning about the death of Iain Banks yesterday, at age 59 (1954-2013). Banks was one of the living science fiction writers I wanted to meet; now I’ll never have the chance. And we won’t see any more stories from his hand. 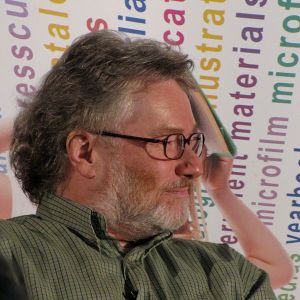 Banks wrote “regular” fiction (much of which was quite irregular) under the name Iain Banks, science fiction under the name Iain M. Banks. Oddly enough, I ran into “Iain Banks” first. At the suggestion of a friend named Mary Hopkins, I picked up Whit, or Isis Among the Unsaved. It’s the story of a woman who is supposed to play a major role in an eccentric religious cult in Scotland, and how she reacts as she discovers the cult isn’t exactly what it seems to be. Her conclusions are not what you would expect in a novel written by an avowed atheist, but instead offer some interesting thoughts on what a religion is.

Most of Banks’s science fiction was built around the idea that in the future humans would live in a benevolent society which has solved the scarcity problem, become capable of space travel, and ultimately turned control over much of their society to highly intelligent machines imbued with the same values. The first of these “Culture” novels I read was Excession, in which the Culture confronts an artifact that apparently is more powerful than it is, and was greatly entertained by the variety of imaginative ideas Banks incorporated into his story. Probably the most caustic of the Culture novels was The Player of Games, in which the Culture’s most renowned expert on games is sent to topple a scarcity-based hierarchical society in which one of the three sexes has engaged in both social and genetic engineering to keep the other two sexes in subordination. Besides being a critique of the way our societies are organized, it’s one of the few Culture novels to show that, even when every material need can be met, there are still things people will want and can’t get.

Banks found out some months ago that he was dying of cancer, and asked his partner of some years if she would agree to be his “widow.” They got married, and he announced to the public that he was dying. Although I knew it wasn’t realistic, I was kind of hoping that one of the intelligent space ships from his Culture novels would come rescue him and take him away before he died.

I enjoy history because it helps me understand people. I'm writing fiction for much the same reason.
View all posts by Brian Bixby →
This entry was posted in Reading fiction, Reviews and tagged Fiction, Iain Banks, Iain M. Banks, Science fiction. Bookmark the permalink.