Prophecies and Penalties Chapter 18, and a short vacation

Emily Fisher’s investigation of the murder of High Council member Stephen Nash has taken a giant leap forward, which makes her happy. On the other hand, that leap implicates her sister Elsie, and Elsie’s lover, the so-called Prophesied One, Alex Bancroft, and that makes Emily decidedly less happy.

So when the two sisters sit down to lunch after Elsie’s interrogation by Quasopon’s police chief, Emily’s expecting some nice quiet time with her sister, a chance to recover after the strains of the last 24 hours. And that’s what she gets . . . until Elsie throws her a curve that upsets the entire investigation again. Join Emily as she discovers one of the mysteries of the Children’s lands in “All things rest connected by hidden knots,” chapter 18 of Prophecies and Penalties.

The title for this week’s chapter is taken from an alchemical drawing featured in Principe’s book The Secrets of Alchemy. It seemed particularly apropos.

By the time you read this, I should have returned from a brief vacation in upstate New York and southern Vermont. We’ve been staying with friends who have two dogs the size of small bears, and three cats of distinctly different breeds and characters, one of which is trying to rival the dogs in size. (He’s thought to be part Maine Coon Cat.) The trip included an excursion with literary connections to previous posts in this blog. One of our hosts looked over the blog, and the next day dropped three hardcover books by Russell Kirk (two of ghost stories, one the novel about Manfred Arcane) into my lap. While yet another person who finds Kirk’s politics intrusive, he did express an admiration for the man’s stories, specifically including “The Reflex-Man in Whinnymuir Close” as one of his better ones. 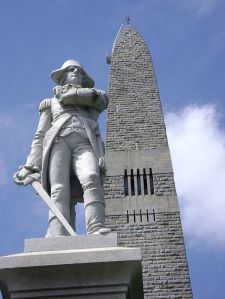 One the same day, we traveled through Bennington, Vermont. Bennington is probably best known for the Revolutionary War battle that helped doom an invading British army, commemorated by a particularly phallic-looking obelisk. Part of our quest was to go see Bennington College, which probably does not wish to be remembered as the model for the campus figuring in Shirley Jackson’s Hangsaman. And along the way we stopped to see the place where she lived for a while nearby, and the small green in front which we are told served as the model for the infamous setting of her short story, “The Lottery.”

The Quasopon of Prophecies and Penalties is on the eastern side of the Green Mountains, so we did not travel to its (fictional) location. Still, as always, the sight of the mountains and the small villages of the region help support my vision of the town and its setting.

I enjoy history because it helps me understand people. I'm writing fiction for much the same reason.
View all posts by Brian Bixby →
This entry was posted in History, Prophecies and Penalties, Writing fiction and tagged detective story, Fiction, murder mystery, religious commune, Vermont, Writing. Bookmark the permalink.

10 Responses to Prophecies and Penalties Chapter 18, and a short vacation