Vernon Lee wrote in an essay that the supernatural and the arts were diametrically opposed to each other. So, of course, she wrote three collections of supernatural stories over the course of her long (1856 – 1935) life. 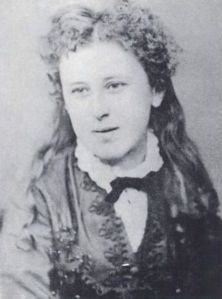 Violet Paget before she became the androgynous Vernon Lee

How do we get past such an obvious contradiction? By reading her stories. And there we find the synthesis by which Vernon Lee reconciled her thesis and antithesis. According to Lee, the supernatural thrives on vagueness, suggestiveness, multiple meanings, and connotations, while the arts define and give distinct limits to what they portray. So the resolution is to have the arts suggest, not define. And that is the secret to Vernon Lee’s supernatural stories. Vernon Lee’s ghosts are not some bogeymen out of M. R. James, appearing before mere mortals in frightening form. No, they are stealthy, insidious, all but invisible. It’s hard to tell they are there, let alone what they are.

I mentioned in a recent post that Gertrude Atherton, another writer of supernatural stories, was friends with Henry James. Well, so was Vernon Lee, and Lee shares in James’s subtlety without his ponderousness. Think of James’s The Turn of the Screw, and then wonder that Vernon Lee probably thought that story not quite subtle enough. For Lee’s ghosts are often out of sight altogether, as in “Oke of Okehurst.” Indeed, the ghost of “A Wicked Voice” is but a sound. Even when the supernatural is set directly in front of the narrator, as in “Dionea,” the narrator and the reader are left to wonder, “Did we really see it?”

Violet Paget, who used the pen name of Vernon Lee, was something of a contradiction herself. She was an immensely erudite woman, recognized as a expert on Italian music of the 18th century, and a popular essayist on learned subjects of the day, yet her works have been mostly forgotten. She was an independent woman who dressed as a man, an English woman who lived most of her life in Italy. She was considered a fascinating, intelligent, and witty conversationalist by many, and yet others found her long-winded, pretentious, and rambling.

If any of this intrigues you, consider tracking down the volume Hauntings and Other Fantastic Tales, edited by Catherine Maxwell and Patricia Pulham (2006), which includes all the stories from Lee’s collection Hauntings: Fantastic Stories (1890), plus three other stories taken from her two later collections. Besides being annotated and more readily available than the original works, this volume also contains Lee’s essay, “Faustus and Helena: Notes on the Supernatural in Art” (1880, 1881) in which Lee explains her views on those two subjects in some detail. Yes, it’s included as an appendix, and no one ever reads those. But read this one first, before you read Lee’s stories. I guarantee you will appreciate her stories all the more.