It was all over but the healing. So Emily Fisher thought once Stephen Nash’s murderers were identified and killed. Nick and Nora Charles could have told her otherwise:

“What do you think will happen to Mimi and Dorothy and Gilbert now?” 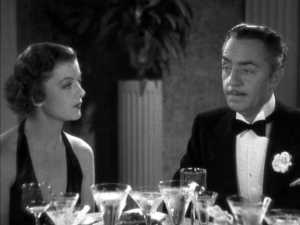 Nick and Nora at their favorite activity: drinking

“Nothing new. They’ll go on being Mimi and Dorothy and Gilbert . . . Murder doesn’t round out anybody’s life except the murdered’s and sometimes the murderer’s.”

“That may be,” Nora said, “but it’s all pretty unsatisfactory.”

As Emily Fisher finds out in chapter 40 of Prophecies and Penalties, “Things are not what I expected.” The fall-out from the Nash murder investigation continues, and Emily is finding it all “pretty unsatisfactory.”

I enjoy history because it helps me understand people. I'm writing fiction for much the same reason.
View all posts by Brian Bixby →
This entry was posted in Prophecies and Penalties, Writing fiction and tagged detective story, Fiction, murder mystery, religious commune, Vermont, Writing. Bookmark the permalink.

9 Responses to Prophecies and Penalties Chapter 40