Mysteries and mistakes: chapter 10 of Summer of the Netherfield Witch

Summer is here, and Jane’s life is getting complicated. She’s just been poisoned by Genevieve, whatever Genevieve is, and saved by Nature and Miranda Milan, but how much of that does she remember? Then Jane’s friend Cindy does something completely unexpected . . . unless you know Cindy. And the week isn’t over yet! Watch Jane Harris deal with “Mysteries and mistakes” in chapter 10 of Summer of the Netherfield Witch. Which, when you think about it, is a apt description of adolescent life: mysteries and mistakes. One tries to figure out what it means not to be a child anymore, what it means to become an adult, and yet at the same time one is neither a child nor an adult. It was so much simpler when people married around age 14! My own adolescence was more mystery than mistakes, because I spent my last five years of secondary school education in a single-sex institution. Cuts down the chance of mistakes by 50%, at least, but leaves the psychology and physiology of the opposite sex terra incognita, at least for much of the year. The last year I was there, the school went co-ed, which is to say they made the middle three years co-ed, leaving the youngest and oldest of us in single-sex classes. I could have pulled my hair out in frustration. Actually, given my social awkwardness at that age, my chance of making any female friends was still approaching zero, but that’s still different from absolutely zero. Sigh. It’s probably the reason I can empathize with Jane’s social and sexual awkwardness. Though I didn’t have a witch messing around with me, at least not that I know of. 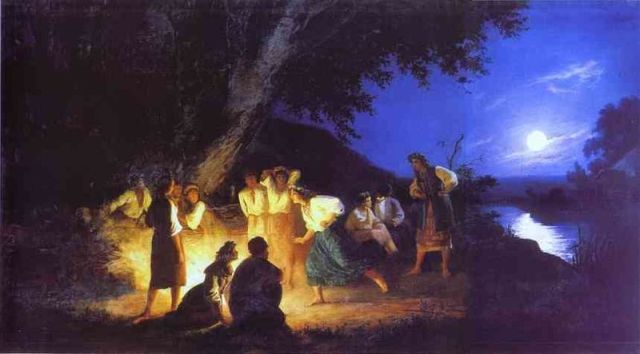 This is the sort of mystery that leads to many mistakes, some of which take 9 months to completion. It’s “Night on the Eve of Ivan Kupala” (a hybrid pagan/Christian midsummer celebration in Russia) by Henryk Siemiradzki (1843-1902)

I enjoy history because it helps me understand people. I'm writing fiction for much the same reason.
View all posts by Brian Bixby →
This entry was posted in Netherfield Witch, Writing fiction and tagged fantasy, Fiction, Magic, occult, supernatural, Writing. Bookmark the permalink.

3 Responses to Mysteries and mistakes: chapter 10 of Summer of the Netherfield Witch