The 2015 moldy oldie(s): Midwich Cuckoos of the Damned

Every Halloween I dust off a long-forgotten supernatural horror story to read and review. It’s been a busy November, which is why I’m only getting to writing up my review of 2015’s selection today.  This year’s “moldy oldie” is the most recent I’ve ever tackled: John Wyndham’s The Midwich Cuckoos, first published in 1957.

Doesn’t sound familiar? Well, maybe because the movie adaptations didn’t use the book’s title. And yes, I said adaptations, because there were three, sort of. First up was Village of the Damned, released in 1960. It was remade under the same title in 1995. And then there’s Children of the Damned, an odd 1964 cousin to its 1960 predecessor. I watched them all a few days after reading the book.

Forget all those other names; just call me John Wyndham

The author behind all these was John Wyndham Parkes Lucas Beynon Harris (1903 – 1969), an Englishman who wrote under various combinations of his names. He first achieved success in the American pulp science fiction market before World War II. After the war, he changed his writing style and his pen name, so it was as John Wyndham that he wrote several major science-fiction novels, beginning with The Day of the Triffids in 1951, which you might know from the movie version released in 1962.

Like several of his novels, The Midwich Cuckoos has its roots in the Cold War and the fear of nuclear annihilation of the human race due to “The Bomb.” While straight treatments of this theme abounded,[i] Wyndham stands the standard treatment on its head. Instead of asking whether humanity would be killed off by the bomb, Wyndham uses evolutionary arguments to demonstrate that humanity will inevitably be killed off by something. And in this novel he proposes an idea of what that something might be: human-like beings superior to us.

It ain’t normal, I tell you!

And so the small English town of Midwich is visited in the night by . . . something, and nine months later every fertile woman in Midwich gives birth to unusual-looking children who are genetically not their own. See where the title comes from? Our narrator, one Richard Gayford, serves as our window into the life of the town, its leading intellectual and squire, Gordon Zellaby,[ii] the national security establishment, and the children themselves. Suffice it to say that Zellaby twigs early that there is something most peculiar about the children, while the national security establishment finds itself befuddled by Cold War complications.

This is not an action novel. Most of the exciting events happen off-page. Instead, what we get are Gordon Zellaby’s philosophical musings about what is happening and its significance. This gives the book intellectual depth, though at some cost in pace and tension. Read it for a window into truly speculative science fiction of the 1950s, and reflect on how it might play out today. And the horror? It’s more of a slow intellectual unfolding throughout the novel. No “jump scares” here.

Why does mind control always seem to involve the eyes?

Philosophical musings translate poorly onto the silver screen. So it’s not surprising that the 1960 movie chose to emphasize the children’s ability to mind-control regular humans, partly by bringing to the screen scenes that took place off-page in the book, and adding a few more. The most visceral scene is of a mother who has to plunge her arm into boiling water because she gave her child food that was too hot.

The 1960 movie looks like a low-budget British job, but for all that it holds up fairly well. If it simplified the book’s plot and dropped a lot of the philosophy, it was ingenious in bringing the children to the foreground and making Gordon Zellaby their worthy antagonist.

The 1995 remake was directed by John Carpenter, so you know it was explicitly a horror film as well as a big budget mainstream American movie. The budget certainly helped the special effects become more impressive. And in covering some issues that the 1960 movie chose to 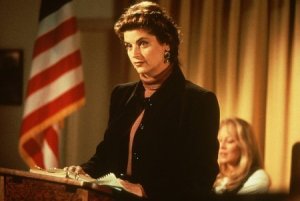 Was making Kirstie Alley play the evil scientist some sort of allusion to her Scientology beliefs?

overlook, such as the deaths during the “Dayout,” the remake has some truly satisfying moments. Unfortunately, while the 1995 screenplay was adapted directly from the 1960 screenplay, the screenwriters made a number of changes that reduce the coherence of the plot. Dr. Chaffee is a poor substitute for Gordon Zellaby, and the addition of Dr. Verner as the “evil scientist,” while responding to 1990s sensibilities, adds a discordant element that doesn’t do much for the plot.

One of the curious changes between the book and the two movies is the role of women. In the book, women play a significant role between the time they become pregnant and shortly after the birth of the children, but otherwise are background characters. The male characters often interpret women in terms that would seem chauvinistic today. The 1960 movie gave the women even less to do. The 1995 movie, on the other hand, gives much greater play to the women’s roles, especially after they’ve given birth. It’s one of the few major improvements in that version. 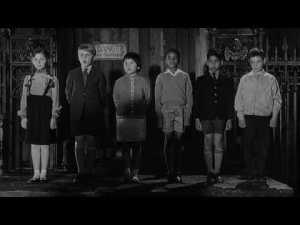 At least Children of the Damned made the evil kids multi-racial. That’s progress, sort of.

Standing off to the side is the 1964 movie Children of the Damned. In many ways, it’s an inferior retread of the 1960 movie. It’s as if all the philosophical material cut from the first movie made its way into the second one, making it dull and slow-paced. While contemporary reviews say it was meant to show the children in a more positive light, to me it makes the children look worse. True, they demonstrate more emotions than in the 1960 movie and are less likely to strike back at anything other than a deliberate attack.[iii] However, instead of just using their powers to retaliate, they cold-bloodedly take control of a relative to use as their servant and spokesperson, making her into a slave. And they build an engine for large-scale destruction, something they never did in the book or the other films. Sad to say, the Children of the Damned act more like adults than their counterparts in the other versions of the story, and that makes them all the worse.

So which should you watch or read? I’d recommend the original 1960 movie as perhaps the best of the lot, balancing the thoughtfulness of the novel with some genuine action and thrills: a thoughtful horror/sci-fi movie. Go with the novel if you want a deeper experience, the 1995 remake if you need Hollywood pizzazz, but stay away from Children of the Damned, lest you, too, be damned.

[i] Notably Nevil Shute’s 1957 On the Beach and Peter George’s 1958 Red Alert, both of which would be made into movies, though the latter was turned into the black comedy Dr. Strangelove or: How I Learned to Stop Worrying and Love the Bomb.

[ii] Which explains the surname of the “cuckoo” in Seanan McGuire’s Incryptid series, one volume of which I reviewed here.

[iii] When you think about it, those two developments are contradictory. Blame the first movie for making out the children to be unfeeling, a trait not supported by their actions nor the novel.

I enjoy history because it helps me understand people. I'm writing fiction for much the same reason.
View all posts by Brian Bixby →
This entry was posted in Reading fiction, Reviews and tagged Fiction, film review, horror, Reading, review, Science fiction. Bookmark the permalink.

1 Response to The 2015 moldy oldie(s): Midwich Cuckoos of the Damned