I’m just going to go all meta on you and tell you the title for this week’s chapter of Magician’s Misfortune is deliberately inaccurate, sort of. Hey, it’s the big fight, the action-filled climax, and if you haven’t been reading this story before, you sure as hell aren’t going to read this chapter.

Oh, yeah, maybe you say to yourself, “Self, an action-filled climax? Maybe it’s got a great fight scene? Oh, yeah, definitely!” My first response is to ask why you call yourself “self” in your own thoughts. You got some sort of identity problem? And then I’m going to tell you that the fight scene (yes, there is one, thanks for blowing the suspense) is going to be absolutely meaningless unless you’ve read the rest of the story . . . unlike the big fight scene at the end of the Twilight movie series, which was absolutely meaningless even if you did watch the rest of the movies.

Anyhow, this is chapter 22, “All hell breaks loose,” that we’re talking about. The title isn’t just a hackneyed cliché; it bears a deep and profound connection to the weighty themes of the chapter.

That doesn’t really save it from being a hackneyed cliché, does it? (And “hackneyed cliché” is a redundant phrase, come to think of it.) And do you really believe me when I talk about profound themes in this story?? And the title isn’t even right, sort of, even though it is sort of right.

I’m not making this at all clear, am I? Good. Read the chapter. Then you’ll understand. 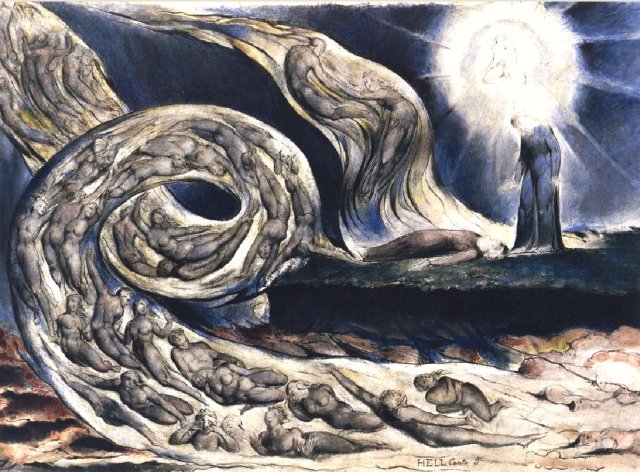 You think after what I’ve written I’m going to explain why I used this picture?
OK, here’s the deal. It’s WIlliam Blake, if by some off-chance your inadequate education didn’t include art history. It’s from his interpretation of Dante’s “Divine Comedy.” And yes, it’s set in a circle of hell. Which one? Think about Harry Eberhardt, and the answer should be obvious.

I enjoy history because it helps me understand people. I'm writing fiction for much the same reason.
View all posts by Brian Bixby →
This entry was posted in Magician's Misfortune, Writing fiction and tagged fantasy, Fiction, hell, Magic, occult, snark, supernatural, Writing. Bookmark the permalink.

10 Responses to Chapter 22 of Magician’s Misfortune