It’s time for the annual “moldy oldie” reading, when I dig up some generally forgotten writer’s horror stories to read for Halloween. This year, Paula Cappa,  an award-winning writer and blogger, introduced me to the stories of Edward Page Mitchell, so I read the groundbreaking 1973 collection of his stories by Sam Moskowitz, The Crystal Man. I thank her for doing so. For, while the collection is short on horrors, it’s a fascinating look at the nebulous borderline between fake news and fiction.

So who was Edward Page Mitchell (1852-1927)? According to Moskowitz, who must be given credit for rediscovering him, Mitchell was the missing link in American science fiction, the man who bridged the gap between Verne and Wells, and probably influenced the latter. Alas, while Moskowitz was a noted researcher of the roots of American science fiction, he let his enthusiasm run away with him at times. For example, crediting Mitchell’s “The Tachypomp” as the first story of faster-than-light travel overlooks the fact that it does not take into account relativistic effects, no surprise since the theory of special relativity wouldn’t be invented for another 31 years. 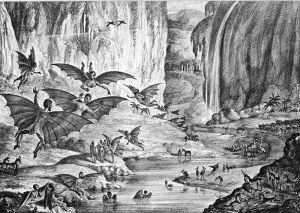 A better way of understanding Mitchell is to see him as a newspaper editor and writer of the late nineteenth century. Mitchell spent most of his life (1874-1926) at the New York Sun, the first successful penny newspaper in America when it was founded in 1833. In those days, newspapers had to entertain as well as inform. And one of the ways they entertained was to create what appeared to be news stories about strange events. Perhaps they were true, perhaps they weren’t. In fact, one of the Sun’s greatest successes was the famous Moon-man hoax of 1835, in which the real astronomer John Herschel was purported to have seen flying man-like creatures on the moon.

One can see this influence directly in some of Mitchell’s tales. “The Story of the Deluge” begins just like a genuine news story, only to switch to humor and political satire along the way. “The Soul Spectroscope” begins likewise, though the use of “Prof. Dummkopf” as its subject tips off the readers immediately. Not surprisingly, several of his stories develop an idea just a little bit and end abruptly, convenient to fill in some space in a newspaper, but unsatisfying as a tale. “The Tachypomp” is passed off as a dream, while “The Soul Spectroscope” implies at the end that its protagonist is a madman. And a few bits are didactic essays that remind me of Mark Twain, another journalist-turned-writer. I could imagine him writing “The Devil’s Funeral” instead of Mitchell.

Can’t have a time-traveling clock without a clock-maker!
(Source: Wikipedia/Wellcome Images)

And yet, Mitchell wrote some pieces that qualify as genuine, well-developed stories, and deserve much of Sam Moskowitz’s praise. “The Clock That Went Backward” really is an elegant story about time-travel paradoxes, even if the “science” behind it is left unexplained. And “The Crystal Man” is a decent invisible man story, in which an innovative technology leads to human tragedy. Better yet, while Mitchell was prone to using many of the hackneyed romantic tropes of his era, to the detriment of his stories, in “The Crystal Man,” he gives one of them a sharp twist that brings it to a startling conclusion.

So what of horror stories? To judge from this collection, Mitchell preferred his horror with a leavening of humor. “The Cave of the Spurgles” and “The Flying Weathercock” are stories which in other hands could have been good horror stories, but Mitchell’s design in the first case and his exposition in the second deprive either story of any frights. And appearances of Judas Iscariot are not as shocking to 21st century sensibilities as they were to the 19th, which lessens the impact of such stories as “The Devilish Rat.”

Yet there are stories which can give one the shivers. Mitchell tackled the subject of conjoined souls twice, and while his story of the Dow twins is marred at the end by his humor, that and the story of the Fancher twins are both eerie considerations of human nature. “The Facts in the Ratcliffe Case” begins innocently enough, and is slow to build up, but pays off in its concluding pages by revealing a human monster. And while “An Uncommon Sort of Spectre” is, despite its name, a common enough ghost story, I appreciate the twist Mitchell gives it.

What is more intriguing to me is that some of Mitchell’s stories have horrific implications that may not have been obvious to his readers, or even to himself. “The Ablest Man in the World” is meant to be a story about advanced technology and human nature, but on second thought can be read as a lesson on how human fears can frustrate noble goals. And “The Senator’s Daughter” has an awful lesson about race prejudice (expected) and sexism (unintentional) at its conclusion.

While it was short on horrors, The Crystal Man was an entertaining read. The British magazine The Fortean Times has been covering these borderline “news” stories for years as curiosities in journalism. It was illuminating to get another angle on late 19th century newspaper journalism, to see how “fake news” could so easily slide into science fiction and fantasy. So thanks, Paula!

I enjoy history because it helps me understand people. I'm writing fiction for much the same reason.
View all posts by Brian Bixby →
This entry was posted in Reading fiction, Reviews and tagged Edward Page Mitchell, fantasy, Fiction, Reading, review, Science fiction, supernatural. Bookmark the permalink.