Oh You Sexy Monster, You! (NSFW)

It’s time for the “Oh You Sexy Monster, You!” awards, Sillyverse edition. This award post is the result of a conversation over at the Sci-Fi & Scary blog, in which I casually challenged its two authors to come up with a list of five monsters that they found inappropriately sexy. They took me at my word, and wrote a post which took my challenge in a, eh, um, very phallic direction (NSFW). Also a very humorous one, if you like that sort of humor. (I do.)

What’s sauce for the goose is sauce for the gander. There is no way I can equal the humor, to say nothing of the visuals, of Lilyn’s and GracieKat’s choices. Indeed, I was going to offer, shall we say, a limp response. But their post convinced me to do it right, do it the hard way. So here we go.

Monster #1: The Thing, from “Who Goes There?” the 1938 novella by John W. Campbell (writing as Don A. Stuart), most memorably made into the movie The Thing (1982) by John Carpenter. If you don’t know this movie, take a look at the trailer. The Thing is an alien creature hostile to all other life forms. It kills and consumes them, and then is capable of perfectly imitating them . . . in every way. If it turns itself into a cow, it gives perfectly good milk. If it turns itself into a sexy woman, well, you can guess. Of course, if it gets the opportunity, it will kill you instead. Might be the best argument for having sex with other people watching.

I pick the Thing over many other creatures that can appear to be sexy women, such as the creature from the very first broadcast Star Trek episode, “The Man Trap” (1966), because the Thing actually becomes an exact physical copy of the woman, whereas so many others just cast an illusion of looking like one (as does the Star Trek creature in the photo to left).

Monster #2: The unnamed angel/demon played by Kate Bush in her video for the song “Experiment IV.” Rumor would have it that in her early days Kate Bush could shatter glass and drive dogs crazy with her high notes; see the original recording of “Wuthering Heights,” her first hit in 1978. I’ve been a fan of hers since seeing the video of 1985’s “Running Up That Hill (A Deal With God).” “Experiment IV” involves a classified military experiment that goes wrong. Just watch the video. You’ll understand. 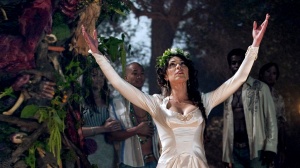 Monster #3: The supernatural maenad Maryann Forrester in season 2 of the television series True Blood (who is radically different from the book version). She will reach into your emotions and encourage you to wilder and wilder fits of emotional abandon. You’ll experience orgiastic frenzies, unleash your anger by beating up people and being beaten up by them, and even turn cannibal, enjoying all these experiences to their sensual fullness. You’ll end up dying one way or another, but, as with The Thing, you’ll have had a lot of fun in the meantime. Oh, and I have a sentimental fondness for the actress who played the maenad, Michelle Forbes, because she was the endearing Ensign Ro Laren in several episodes of Star Trek: The Next Generation. 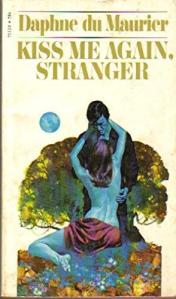 Monster #4: Many a young lad, as he hits puberty, is attracted to some sexy character in literature, television, or film. The YouTube channel Screen Junkies even makes a joke about how many boys of the right age fell in lust with Emma Watson playing Hermione in the Harry Potter movies. Well, one of the characters a young Brian was attracted to was the young miss on this American paperback book cover circa 1965, and the charming description Daphne du Maurier gives of the young lady in the 1952 short story of the same name. She’s fully human, but she’s a monster, mad and deadly. However, I don’t meet her criterion for killing, so I’d be safe.

This is NOT how Lady Sylvia looks in the movie. It’s one of the book’s original illustrations of Lady Arabella, created by Pamela Coleman Smith, who did the illustrations for the Rider-Waite tarot deck.

Monster #5: Lady Arabella/Sylvia Marsh from “The Lair of the White Worm,” originally a Bram Stoker novel (1911) (where her name is Arabella), very loosely adapted into a movie (where her name is Sylvia) by Ken Russell in 1988. I go with the movie version on this one. As played by Amanda Donohoe, Lady Sylvia is exotically hot. But she is a very, very bad date, since she’s the double of the title character, and will violate you with everything from fangs to a strap-on dildo (my one concession to Lilyn and GracieKat). And, to return to the book for a moment, the ending scene is often described as the symbolic destruction of a vagina. I have to caution you: many people will find both the original book and the movie to be offensive and/or bad entertainment. The book demonstrates that the author of Dracula did not know how to reproduce his success in later novels, and unexpurgated versions contain a number of offensive racial terms. The movie features scenes of sexuality and images that might be considered blasphemous. YouTube won’t let me link to the original trailer, but here’s a link to the trailer for the Blu-ray release, which will give you the flavor of the movie.

And there you have it. I hope this list has entertained, maybe even intrigued you to check out some of these creatures. And I also hope that no one’s going to call the padded cell boys to come pick me up.

10 Responses to Oh You Sexy Monster, You! (NSFW)