The story so far: Tollon is hunting for dragon’s teeth on behalf of his master, Court Magician Sarton. He’s met up with famed mercenary captain Katrina, who advises him to blackmail the Earl of Haulloran to get some. If you want to read the previous chapters, go here. Otherwise, read on . . .

Aye, blackmail one of the most powerful nobles in the land, whose wife is probably the most dangerous noble in the land. I shake my head and in a low voice tell her, “I’m not suicidal.”

She pitches her voice low, too. “You don’t have to be. Sarton should be able to protect you from her, and the Earl has his hands full.”

I shake my head. “Still, no.” And I am not going to explain why.

Katrina starts to get exasperated. But then we’re interrupted. Behind her, a shape looms, belches, and says, “If you’re going to bed a wee lad like him, Captain, you might as well sleep with a pretty woman.”

I recognize that voice. It’s dear old Corporal Wayne.  And he is drunk. Katrina turns in her seat to look at him, and I get a good view of him. He’s drunk, but it doesn’t show much, him being a big guy. He must have been ending his shift when I went in the main gate, and has been hanging out here, or someplace like this, ever since.

I can’t see Katrina’s face from this angle, but the fact that’s she’s in the process of standing up does not bode well for the corporal. In a no-nonsense tone, she says, “You just insulted a captain, corporal, while drunk. You know what that is called?”

Give the corporal some credit. He manages to say, “Insubordination,” fairly clearly.

Katrina shakes her brown, wooly head. “No, corporal, it’s called stupid.” And she jabs him hard in the belly.

Corporal Wayne goes down. He rolls on his side to vomit up his last few drinks. And he stays there, sobbing.

Katrina turns to me. Still keeping her voice low, she says, “Well, it’s up to you. Find Jerrod, or blackmail the other.” She leans closer and drops her voice even more. “And if you want some company in bed tonight, let me know.” She plants a kiss on my cheek, gives me a wink, and returns to her beer.

I smile, weakly, before turning away from her and leaving the bar. Because weak is how I felt the one time I took her up on such an invitation. Katrina does indeed have a soft spot for guys like me. But she’s also got the musculature of a successful warrior. Oh, I enjoyed our time together. I just don’t think I could survive a second time.

So I start going from pub to bar, bar to beer hall, trying to find Jarrod. He’s another mercenary, gambles a lot, rarely wins. Katrina tells me he’s actually brilliant on the battlefield, she’s served with him, but at cards, dice, or pool? He’s a sucker. The only reason I’ve never tried to win anything off him is that he might decide I’m not honorable enough to be allowed to win money from him. Some mercs are touchy that way.

But my mind keeps going back to Haulloran. Could I blackmail him? On the face of it, the idea still seems ridiculous, on many counts. But it keeps nagging at me.

You’re probably wondering just how I could blackmail him. It’s simple. I’m allowed at Court with Sarton. Once there, all I have to do is publicly accuse Haulloran of fathering the queen’s child. Assuming he is, he would not be able to escape execution, not even if Lady Gwella pulled a flightless parrot out of her purse. Of course, there’s a high chance I’d also be executed, but I’d be counting on the Earl being sensible. Which, except for marrying Lady Gwella, he typically is.

And that’s the rub. I have to find a way to get at the earl when he’s alone, without his lady at his side. Oh, and be sure he’s actually the father of the queen’s next child. But I think the latter will be easy. And might even give me a way to get to the earl on his own.

I have no luck turning up Jerrod. I go back to Sarton’s workshop for a lengthy lesson on properly sacrificing a lamb. Like most such magical activities, it varies by the nature of the creature you’re trying to summon. Demons like pain-filled deaths. Angels like perfect specimens. Ghosts want blood, And so on.

It’s late when Sarton finishes instructing me. He still hasn’t mentioned the dragon teeth again. So I shuffle off to my room on the fifth floor. The corridors are lighted with torches, so I don’t bother carrying a candle. My room’s completely dark when I enter. I’m so tired, I just drop onto the bed.

Which turns out to be occupied. 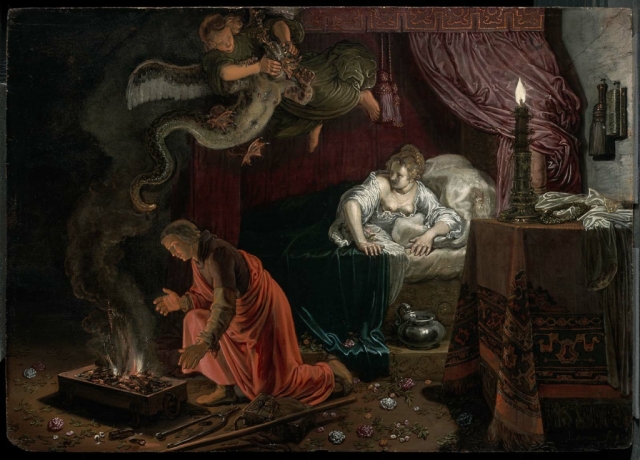 I enjoy history because it helps me understand people. I'm writing fiction for much the same reason.
View all posts by Brian Bixby →
This entry was posted in Magician's Apprentice, Writing fiction and tagged fantasy, Fiction, Humor, intrigue, Writing. Bookmark the permalink.