The story so far: On the run from the law, Tollon worries that a magician might also be hunting him. Now read on . . .

Zilla is pessimistic. “I often dismiss Sarton. But that’s because he’s been uninterested in what goes on in Gehulia. In a fight, I’d lose. So if this Vorana has displaced him, I won’t be able to protect you, Tollon.”

We’re in Zilla’s office, in what passes for a respectable street in Gehulia. Here, Zilla is herself, a middle-aged woman, and not the withered crone she plays out on the streets. There are only two other people who see Zilla as she really is: her lover and her clerical assistant.

“That’s if she finds out I’m here,” I point out. “And you’d sense any magical work in the neighborhood, wouldn’t you?”

Zilla gets up and goes to the window behind her desk. Looking out at the street, she says, “I would, and I have. It started two days ago. Someone’s testing the limits of my power. Whoever it is, they’re pushing a lot harder each day.” She turns and looks at me. “This isn’t just about you, I’m sure, not with the sort of power I’ve felt. Someone’s planning a magical attack on Gehulia, a major one, probably within the next pair of days.” She frowns. “And I tell you, Tollon: they are going to win.”

Grim news. “What are you going to do?”

She sits back down in her chair and shrugs. “Stay. Fight. Quite possibly die. I don’t have much choice. I’d be too vulnerable if I tried to run.” She offers me a sad chuckle. “You’ve come to me for help. Now the only help I can give you is advice. You’re young, you’re capable, but you haven’t yet had the time to build up your own power enough to slug it out with an experienced magician.  And, as you’ve found out yourself, gods are capricious. They are not to be relied upon.

“So leave Gehulia. Flee this city. Go find an ally you can depend upon. I can give you a name: Chypa the Stranger. If you can find her, you can depend on her.”

I ask the natural questions. “Where do I find her? And why can I trust her?” 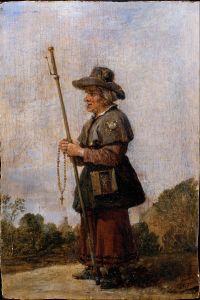 One tribe of wanderers are religious pilgrims

Zilla shakes her head. “Where you can find her, I don’t know. She wanders all over the world.  But if you go looking for her, you will find her. As for trusting her, I’ll let you be the judge. She’s my aunt and Sarton’s third wife. And she’s definitely no friend of Vorana’s.”

With Zilla’s words ringing in my eras, I go back to my lodgings, a room in a sprawling boarding house on the east edge of Gehulia. I pack up what I need: clothes, money, a single grimoire I borrowed from Zilla, and the remaining dragons’ teeth. I’m all set to leave when there’s a knock at the door. Sword in hand, I open the door.

Inacha stands there, dressed in nondescript riding clothes. Without preamble, she says, “I have two horses ready. Zilla says you’ll need help finding Chypa the Stranger. And I am an information broker.”

I enjoy history because it helps me understand people. I'm writing fiction for much the same reason.
View all posts by Brian Bixby →
This entry was posted in Magician's Apprentice, Writing fiction and tagged fantasy, Fiction, Magic, mystery, Writing. Bookmark the permalink.