The story so far: Finding the capital in the hands of their enemies and hunkering down for a civil war, Chypa and Tollon decide to create a magical soldier. But is that safe? Now read on . . .

Our newly created dragon warrior turns around in a complete circle, sword in ready position. And then it comes and kneels in front of me. “Lord of Tyznar Heights, I am at your service. Though I have to say I’m astonished to be here, in this form. The last thing I remember is being killed by a god.” And she stands up. It is indeed the one we wanted, Katrina of Moss.

“You know this resurrection is only temporary?” I ask her.

She nods. Her eyes are dragon eyes, her face is covered in dragon scales, but that is Katrina there. Knowing she has only days to live doesn’t bother her. She is a warrior. “Frawkza told me. So we’d best get a move on. Who do I have to fight?”

“Nothing so simple,” I reply. “We need your talents to organize, strategize, and lead an army of soldiers such as yourself.”

I’m not sure dragon soldiers can actually smile, but Katrina is trying her best. “All the better. Explain what you need and what you have, and let’s get down to business.”

It’s something I thinks she soon regrets saying. Chypa explains what magic we’re up against. Inacha provides our intelligence on the forces available to the king and Vorana on one hand, and to Earl Haulloran on the other. Katrina has a deep respect for magic, because she knows it can get her killed before she accomplishes her mission. So she spends the day locked in conversation with those two. And I get to play odd man out.

I could mope. But I’ve got to hold up my end. So I take a tour with Sput of the wall around Gehulia, and ask him what he knows of Evana and her father. The wall looks to be impervious to anything other than a major magical attack. Nor is Sput very encouraging about Evana.

“They were released, and then retaken a few days later.  And we have no information about what’s going on inside now,” he tells me. “There isn’t a wall around the palace, but there might as well be. Every entrance is covered by magic. You go in without permission, and you don’t come out, save as Lady Vorana’s slave. Two of our best snuck in there, and then gave up every secret they knew. We lost twenty folk before we could cut ties and contain the damage.”

We are walking just out of sight of the palace when we pass by the entrance to a temple to Thessar. Remembering how the Honorable Alencar sacrificed her finger to Thessar, I decide to offer up a more pecuniary offering, just to play it safe. Sput has other things to do, so we part ways. I go in. 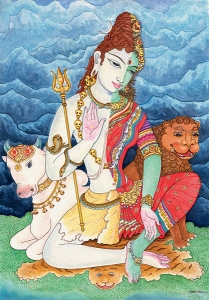 Thessar is represented as an androgynous figure standing beside a small child and looking kindly down upon the child. Why Thessar is depicted as androgynous and yet bears a masculine name is something I’ve never learned. I go up to the big statue, bow, mutter a brief prayer asking for the god’s help, and go sit down on a bench and lean forward in prayer.

I really could use the god’s help. Chypa thinks a god is working with Vorana, or perhaps is working Vorana as a puppet. And after my encounter with Ovedisca, I am not hopeful we can cope with another god.

One of the priests comes around with a collection plate. I get out a gold coin, a Tanifisayan ducat, and drop it in the plate. The priest murmurs, “The god thanks you for your offering. May your design prosper according to its merits.”

There is something familiar about that voice. I look up into face of the priest.

I enjoy history because it helps me understand people. I'm writing fiction for much the same reason.
View all posts by Brian Bixby →
This entry was posted in Magician's Apprentice, Writing fiction and tagged fantasy, Fiction, Magic, supernatural, Writing. Bookmark the permalink.