Clark Ashton Smith influenced me, but I don’t write like him!

As I write, it’s the birthday of Clark Ashton Smith (January 13, 1893 – August 14, 1961), a horror and fantasy writer who might best be described as “almost famous.” He’s most often remembered as a member of the triumvirate that dominated the pulp magazine Weird Tales in the early 1930s, but he doesn’t have quite the dedicated following of Robert E. Howard (best known for Conan the Barbarian) or H. P. Lovecraft (the Cthulhu Mythos). 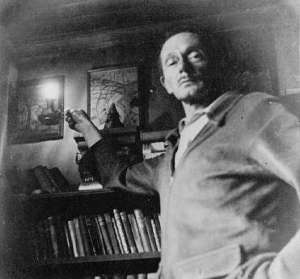 Like many readers, I encountered Smith’s writings through his association with H. P. Lovecraft. And Lovecraft I picked up from the 1970 movie version of The Dunwich Horror. Say what you want about that film, the opening animated credits are creepy. So I got around to reading Lovecraft in college, and that led me to Clark Ashton Smith’s “The Return of the Sorcerer.” Only . . . wait, I knew this story. I’d seen it adapted to TV on the old horror anthology Night Gallery, hosted by Rod Serling (trying to repeat his success with The Twilight Zone). The episode stars Vincent Price, who looks like he’s having a great time, a very spacey Patricia Sterling, and, as the normal person, Bill Bixby (who is probably a very distant cousin). The episode is done up gorgeously, and if it’s a bit campy, this is one time camp works. You can watch it for yourself here.

A few years later, Pocket Books put out three volumes of Smith’s short stories, which gave me a broad sampling of his writing. My opinion of Smith’s stories changed radically while reading those volumes. Of the three Weird Tales writers, Smith was by far the master of the largest vocabulary, the most colorful description, the lyrical turn of phrase. While he had the customary amount of gore, there was a curiously antiseptic quality to it: it was less described than suggested, quite different from the bloodbaths one finds in horror literature today. In fact, it’s hard to segregate Smith’s stories into exclusive categories of horror and fantasy. His horror was fantastic, as in “The Return of the Sorcerer,” and his fantasies, however pretty, often concealed a horror, as in “The Enchantress of Sylaire.”

One of the reasons why fantasy and horror were so closely intertwined in Smith’s stories is that he was a master of irony. It’s a rare Smith protagonist who got exactly what he or she wanted. Either there was a price to be paid, or the goal turned out to be something quite different from what was imagined. Malygris tried to recapture his youth in “The Last Enchantment,” with poignant results. The wizard Eibon, armed with a magical word, escaped to another world in “The Doorway to Saturn,” only to find out that everything he knew was wrong. Life went spectacularly wrong, to the amusement of the reader but not the protagonist, in “The Seven Geases.”

Many of Smith’s stories were tied to an elaborate mythology that overlapped the writings of Lovecraft and Howard (whom he knew by correspondence). But I happen to like his Averoigne stories the best, the ones that were based in a fantastical version of medieval France. I suspect that my rogue scientific magician from the year 2000 (from a story I have only alluded to on this blog) owes some of her morally ambiguous character to the sorcerer Gaspard du Nord, featured in “The Colossus of Ylourgne.”

It’s rare that a horror story actually spooks me. But Clark Ashton Smith did it, with “Genius Loci.” Unlike many of Smith’s fantasies, the horror in this one was open and obvious . . . and therefore somehow more enticing and marvelous. I’d like to write a story like that one. I’ve never come close.

7 Responses to Clark Ashton Smith influenced me, but I don’t write like him!