After the convention, a prospective writer’s report

Yours truly went to Boston’s four-day sci-fi/fantasy convention, Arisia, this weekend. I did it partly as a fan, but mostly as a prospective writer (i.e., someone who wants to actually make some money and get some recognition for writing). My overall take? Easy to do, hard to do well.

Arisia is a convention that’s held every year in Boston. About 3000 people go to it, and they go for a lot of reasons. There are the readers, who want to talk about their favorite stories and changes in the genres. There are the media fans, which this year included a lot of Doctor Who fans celebrating that show’s 50th anniversary. There are the gamers, who occupy several rooms ’round the clock. There are the costume lovers, who dress up for the whole con, some with truly spectacular outfits. I swear I saw Tasha Yar’s clone. And there are the writers, professional, part-time, aspiring, and would-be. These categories overlap a great deal.

For someone who’s read sci-fi/fantasy since childhood, I’ve gone to very few conventions, as in three, including this one. One of the others was another Arisia a few years ago. Then I went as a reading fan. This time I went as an aspiring writer. I wanted to go to panels to meet successful writers, hear their tips, maybe chat with them, and if I was really lucky, spend some time with a publisher, show them my heart (or manuscript), and have them fall in love with it and make me a millionaire.

The good news is that I didn’t score a million-dollar advance, so you’ll have my blog to read for a while longer. The other good news is that it’s really easy to get published (though not by a major publishing house). The mixed news is that the major publishers in the field apparently are as confused as everyone else about where the business is going. And the final truth is that if you want fame and/or money, you’re going to have to work hard. Or be such a charismatic figure that people will flock to you and read whatever you write and do whatever you say. You may be such a figure; I am emphatically not.

The key problem is reaching a wide audience, otherwise known as distribution and marketing. Self-publication of an e-book through the major services short-cuts the distribution problem, at the cost of excluding you from bricks-and-mortar bookstores, which still have quite a following, if only because people will see your book there. And that still leaves you with marketing to be done all by yourself, and the stigma (and yes, it is still a stigma) of being self-published.

Now the writers on the panels I attended were predominantly published through small presses, some though the majors, and a few were only self-published. (Yes, that is still a level of success and you should not belittle it; most would-be writers even today never really get that far.) What was most interesting was their view that publishers do a better job at distribution than at marketing, and that unless you are one of the top writers for a publisher, you should be prepared to shoulder the burden of most of the marketing yourself.

If you have your heart set on signing with a major publisher, having an agent still seems to be all but a necessity. It’s not just getting your foot in the door, it’s also dealing with the complexities of contracts. There was a dearth of inside information on getting an agent at the panels I attended.

But let’s say you’re willing to take things gradually: do some writing, do some marketing, gradually get more sophisticated and successful at both, and then land a contract with a major publisher (if they’re still around then). My impression is that most writers on the panels I attended would recommend such a course. The issue is that almost anyone can self-publish an e-book, if they want to, so self-publication is no guarantee of quality. The writer’s problem is building up a reputation for quality, expanding the base of readers, and then using those two things to attract a deal from publishers. In short, the would-be successful writer has to take on the roles of writer, lawyer, distribution strategist, technologist (if going the e-book route), marketer, and financier, or have other people help out on these roles (at a price).

None of this was entirely new to me. What made Arisia valuable was hearing a lot of writers say it, support it with their experiences, and lay it out in detail. Being a professional writer can easily become a full-time job, and we’re not talking about spending 8 hours a day writing, either. This explains why so many would-be writers don’t publish, or only publish a few e-books these days. It also explains the tension in the lives of most writers, who depend on a day job for most of their income, and so find they have little time to write, time that’s further reduced by having to manage the other aspects of being a writer as well.

I’m not sure if the writers I saw were representative of the field, but the two sub-genres they discussed the most were epic fantasy and “steampunk” (which seems to have expanded beyond its original lack of definition to include a lot of sci-fi/fantasy with advanced technology set in the past), with “urban fantasy” (which is sometimes coded language for black/Hispanic fiction) coming in third. Everyone wanted to badmouth vampire fiction in the aftermath of Twilight, but no one went so far as to say the sub-genre was dead.

There were quite a few panels on improving your writing, with all of the panelists in agreement that you don’t want to submit crap (shoddily edited work) to a publisher. If you’re not sure about your writing skills, these are worthwhile attending. And while I think I know my strengths and weaknesses, they did mention a problem I’ve noticed in my writing, gave it a name, and suggested a solution. The one major recommendation, above all others: find someone to serve as a reliable editor of your work. That person should note anything in your text, whether grammar, word choice, plot holes, inconsistent characters, and anything else that would make a reader and publisher want to stop reading your work.

Overall, a good convention is a decent resource for the would-be writer, in that she or he can learn from the experience and advice in detail from several people who have already made it so far. I’ve got a lot more information than I’ve covered here that I need to review and digest.

Oh, and the t-shirt with the dragon-headed walking stick? A case of not thinking it through. At a con where there are hundreds of people walking around in costumes, a t-shirt with a unique design is still almost invisible. Glad I had it done up and will use it again somewhere else. But at the con, I would have attracted more attention by wearing a codpiece. 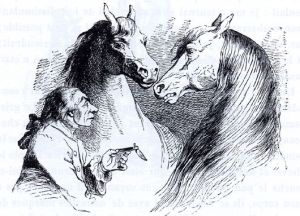 This would have looked normal at Arisia

17 Responses to After the convention, a prospective writer’s report