Chapter 22 of Dragon Lady, and my patron saint of digressions

“Solomon Davis takes charge,” chapter 22 of The Dragon Lady of Stockbridge, is now available. The future leader of the Office of Occult Affairs arrived on the scene too late to prevent the holocaust in the previous chapter. What’s left for him to take charge of?

Just one chapter remaining after this. If you’ve not been reading Dragon Lady, start here.

Today’s post is dedicated to my current patron saint of digressions, Jan Potocki (1761-1815). Why him? Well, let me tell you a story. 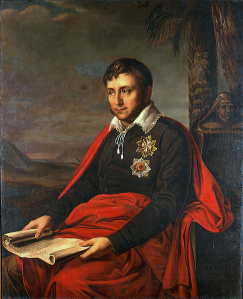 Before he shot himself

You see, there’s this film, The Saragossa Manuscript. It’s a black and white flick from 1965 made in Poland. And Jerry Garcia was very fond of it. He might still be, if he wasn’t dead.

Jerry Garcia? You know, member of a band called The Grateful Dead? A band famous not just for bootleg recordings of their live performances, but for spectacular drug use by the band and its fans? Which might give you an idea of how to appreciate The Saragossa Manuscript. Because it does sometimes seem one is on a trip. Of course, the protagonist is on a trip in the film, but you know what I mean.

Anyhow, getting back to the story, my girlfriend persuaded the local DVD rental shop to buy the film and rent it out. How did she do that? She’s a nerd. Nerd girlfriend talks to nerd store manager/part-owner. Need I say more?

Anyhow, so I saw the film. It helps to take notes. Then again, if you’re on drugs, these notes might not be informative. So maybe you’re better off not doing drugs the first time around. Or the second. Or the third. Or maybe being drugged all the time is the only way to watch it.

I don’t mean to digress, but I have to admit my own experience with drugs is not very extensive. Caffeine, alcohol, aspirin (my second favorite; why? don’t have time for that digression), whatever the dentist uses when procaine isn’t enough, a token pot experience, and a demonstration of how easily pain killers can knock me for a loop. But not tobacco.

Why not tobacco? I was about six years old, and the family had gone out to a drive-in to see a movie doubleheader. Got my soda and popcorn, and consumed them both within fifteen minutes of the beginning of the first film. I put way too much salt on my popcorn, so I was thirsty. Went looking to see if any of the soda cups had melted ice water in them. Found one that did, put in my straw, and sucked. Nothing. Sucked harder. Nothing. Gave a really big pull on the straw. And the water came up. As did the cigarette ashes. My mother had used the cup as an ash tray. I had cigarette ash coating my mouth. It was horrible. I needed to explain this to my parents, to get them to pay for me to go get another soda to clear my mouth out, but didn’t want any surface in my mouth to touch any other surface while I was talking. Must have sounded like a drunk with a speech impediment. But I finally managed to convey my agony, and got the change for the soda. And that’s why not tobacco. 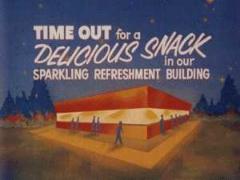 Anyhow, to get back to the story, if I see a movie I like, I’m often tempted to read the book. The Manuscript Found in Saragossa (which is how the paperback version I have is entitled) is the English language translation of the posthumous Polish translation of the lost French original written by a Polish military officer. Say what?

Count Jan Potocki (1761 – 1815) had the misfortune of growing up while his native land of Poland was being wiped off the map in the three great partitions (1772, 1792, and 1795). He was a noted engineer, hot air balloonist, and travel writer. On the other hand, he was a man without a country, a reformer without success, and partner to two failed marriages. He committed suicide, but for some reason I can’t fathom, the date on which this happened is uncertain. You would think people would know on what day a man shot himself in the head with a silver bullet.

Oh, and speaking of people shooting themselves in the head, weren’t you taken aback by Rebecca Farnsworth’s rather drastic method of solving her problems? Doing to herself what Maverick would have had Rev. Wilson do to her earlier?

Anyhow, back to the story. Potocki, civilized nobleman and reformer that he was, composed The Manuscript Found in Saragossa in French to reach a wide readership, but he never published it as a whole, and was revising it in his final years. His reputation in Polish lands for his other achievements was such that someone bothered to translate and publish the book as a whole in Polish . . . and then the French manuscript vanished from history.

The Manuscript Found in Saragossa is structured as a complex series of tales within tales, ostensibly about the journey of a military officer through a wild and desolate region of Spain. It’s a wild ride, filled with mysticism, gypsies, secret societies, and much more. Initially, the story seems to be going nowhere, and getting there in no hurry, either, as each story seems to spawn digressions, repetitive loops, and the interweaving of other stories. 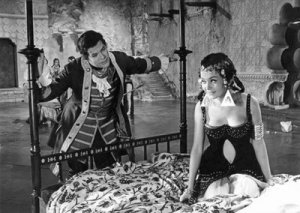 Some digressions are more pleasant than others

In the end, although the Manuscript seems to wander as much as Tristram Shandy, Potocki does pull all of its threads together. The digressions cease to be digressions, the mysteries are revealed, and the story comes to a fitting conclusion. Which is more than can be said for Potocki’s life, sadly.

It’s one of the rules of writing, so I was repeatedly told at Arisia (a Boston-area sci-fi/fantasy convention, for which see previous post), that one should not digress, that every element of your story contribute to the main plot and themes, and in particular that sci-fi/fantasy writers do not fill up page after page with the extensive world-building in which they engaged to serve as background for their stories. The very first story I wrote almost collapsed because I felt I had to write in too much background. But, just as I learned from the drive-in incident to avoid tobacco, so that story taught me to avoid long background digressions that don’t contribute to the story.

So you readers may have been wondering just why I spent half a chapter back in chapter 10 of Dragon Lady using a pair of telegrams to introduce this otherwise irrelevant character, Solomon Davis. It looks like a pointless digression, much like about 90% of The Manuscript Found in Saragossa. And that violates the rules.

Well, stuff the rules! Because here’s Solomon, twelve chapters later, doing what has to be done to help explain the whole story and bring it to a conclusion. Just like a lot of Potocki’s apparent digressions. And that’s why Potocki is my saint of digressions, for today.

5 Responses to Chapter 22 of Dragon Lady, and my patron saint of digressions