In pursuit of a history of spiritual shaking

After being sick for a month, I decided to get out of the house and go visit the former site of a Shaker village. Most Americans these days, if they think of the Shakers at all, think of their finely crafted furniture, especially their chairs. But in their heyday, the Shakers had a reputation as religious radicals, and they claim to have been the first spiritualists in the United States.

The Shakers began in England, but they flourished after coming to America in 1774. Over the next eighty years, they would spread from Maine to Kentucky, with perhaps 5,000 members living in their communal villages. As a matter of faith, Shakers were celibate, yet they worked together, lived together, and prayed together, all the while trying to keep the two sexes from having private time with each other. Their villages were organized into one or more “families,” each of which owned and managed all their property in common. 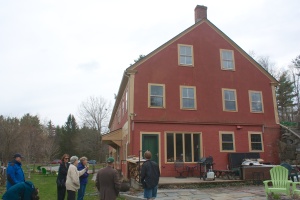 I rode my bicycle over the hills of Harvard, Massachusetts to visit three buildings erected and used by the South Family of Harvard’s Shakers. The Shakers lived at Harvard from the 1780s to the beginning of the twentieth century. By then, there were so few Shakers in Harvard that they sold the buildings and relocated the remaining members to other villages. 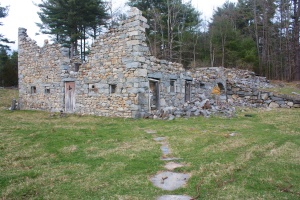 The ruins of the great barn (photo: Peter Van Demark)

Preservationists know that the chances of an old building surviving are much greater if the building is being used. Two of the buildings I visited have remained in use, one as a home, the other, for much of its history, as a chicken coop. They’ve suffered some damage and had alterations, but they are still mostly what the Shakers built. The third building, the great barn, was not so fortunate. It was partially destroyed by fire some decades ago, and what is left is at the mercy of the weather.

A depiction of one of the outdoor spiritual ceremonies

If you read a textbook on American religion, it will probably tell you that “spiritualism” began in 1848 with the Fox sisters in upstate New York. The Shakers would tell you differently. They were talking with the dead almost from the day they arrived in America. And in 1837 began their Era of Manifestations, when the spirits communicated regularly with the Shakers through selected “instruments” (as the spirit mediums were called). The instruments gave voice to dead Shaker leaders of the past, and great historical figures such as Ben Franklin, who admitted to seeing the error of his ways and becoming a Shaker in the afterlife. The instruments would relay spiritual guidance from beyond, and lead the faithful in elaborate outdoor ceremonies in the early 1840s. Members would receive spiritual “gifts,” which ranged from feeling the need to clean and sweep to engaging in ecstatic dancing and whirling.

The enthusiasm of the Era of Manifestations gradually died out, and by the 1850s the Shakers seemed more embarrassed than proud of what had happened. It didn’t help that several of the prominent instruments had left the Shakers, which raised a question about how real their spiritual gifts had been. It’s not that the Shakers lost interest altogether in communicating with the spiritual world after the 1850s. What seems to have happened is that they gradually abandoned the unique practices of the Era of Manifestations and adopted the more common forms of spiritualism abroad in America. The distinctive spiritual works that survived were put aside and forgotten or even lost. So it wasn’t until the middle of the twentieth century that outsiders became aware of the spirit drawings that some Shaker sisters had made during the Era. These have since attracted a great deal of scholarly and popular interest.

The famous Tree of Life by Sister Hannah Cohoon

The Shakers gradually declined in numbers after the Era of Manifestations. Starting in 1875, they began closing their villages and selling them off. Today, only a few Shakers remain in their one village in Sabbathday Lake, Maine.

The Shaker buildings in Harvard are in private hands, and you will need to speak to their owners to visit them. (I went as part of a group of Shaker enthusiasts and scholars that made arrangements beforehand.) There are other Shaker villages that are open to the public. If you’re interested, a good starting place is the National Park Service “Shaker History Trail” web site that lists the major Shaker villages and provides information on how to visit them.

I enjoy history because it helps me understand people. I'm writing fiction for much the same reason.
View all posts by Brian Bixby →
This entry was posted in History and tagged History, Shaker village, Shakers, spiritualism, Travel. Bookmark the permalink.

2 Responses to In pursuit of a history of spiritual shaking