Traveling in imagination to Viking Iceland 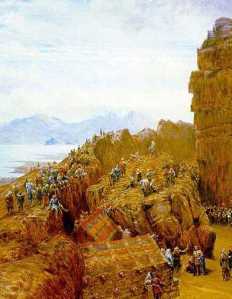 I’ve recently been reading books on medieval Iceland. It’s a fascinating period in a curious land. The island was settled by Vikings fleeing from the rule of the first major Norwegian king, Harald Finehair (c. 850 – c. 932), or so legend says. They founded a country that functioned with a government of chieftains who met only once a year, the Icelandic Commonweath or Republic, which endured until the Icelanders, exhausted by internal wars, submitted to the King of Norway in 1262. And these Icelanders of the Commonwealth era wrote many works about their history and their beliefs, works that survived into modern times, so we can learn quite a bit about them.

Much of their history, often fictionalized, is embodied in their sagas. Ironically, I started by reading one of their sagas about another land, the Orkney Saga, about the history of those Scottish islands under Viking rule. But I soon branched out into what are called the “family sagas,” sagas about how Icelandic families and individuals lived in Commonwealth days. In fact, I used two of these sagas, Egil’s and the Laxdæla, when teaching Western Civilization courses. Apart from general curiosity, I needed to know more about them than my students, so I did more reading in such books as Jesse Byock’s Viking Age Iceland (2001), a book which discusses life during the Icelandic Commonwealth, as interpreted through the family sagas. I’d recommend it, with one reservation: Byock’s explanation of Icelandic culture through interpretation of the sagas should not be taken as literal historical fact.

In the last century of the Commonwealth, the island was riven by conflict between political leaders who had accumulated unprecedented power. This is referred to as the Age of the Sturlungs, after one of the major families involved in these conflicts. And one of the Sturlungs, Snorri Sturluson, was responsible for several of the written works from this period, and is an important political figure as well. 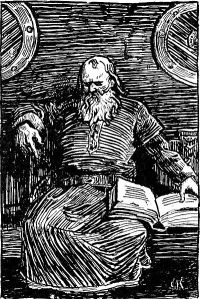 Snorri as imagined by the 19th century Norwegian illustrator

Now Byock, and most of the reference materials I’ve consulted, have been fairly vague on the Age of the Sturlungs. So I was pleased to see a popular biography of Snorri Sturluson come out, Nancy Marie Brown’s Song of the Vikings: Snorri and the Making of Norse Myth (2012). If you want to know who Snorri was, what political life was in the Age of the Sturlungs, what role Snorri played in those politics, his role as a writer, and the shaping of Norse mythology, this is the book for you. However, as with Byock’s book, I have a major reservation about Brown’s work. Because information on Snorri is often scanty (and in how many places have we seen that problem before?), Brown uses literary works attributed to him, including some for which the attribution is controversial or dubious, to illuminate his thinking and character. As a way to introduce the reader to 13th century Iceland, this technique cannot be faulted. It does a good job of giving the reader a sense of life in Iceland in this period. But it goes beyond what historians would find as acceptable reconstruction of Snorri’s life.

Still, it led me to track down and read one of the works attributed to Snorri, the Prose Edda (the Penguin edition of which is translated by Byock, which gives you an idea of how few English-language authorities there are on Icelandic culture). Together with the Poetic Edda, which comprises traditional poems, these works provide most of out knowledge of Norse mythology.

Now, I got most of my knowledge of Norse mythology from Edith Hamilton’s Mythology: Timeless Tales of Gods and Heroes (1942), and I always wondered why she gave it such short shrift compared to Greek and Roman mythology. After reading the Prose Edda, I understand. Thanks to the way people of my generation (and many previous generations) were brought up, we considered the literary corpus of Greek and Roman mythology as how the mythology of a polytheistic religion should look, as opposed to interpretations of that mythology according to the culturally-specific literary canons of Greek and Roman theater and poetry. However, the Vikings did not live as the ancient Greeks and Romans did, and Norse mythology was not interpreted in the same way. We have it in forms not far removed from oral poetry and story-telling. The main portion of the Prose Edda is in the form of a question-and-answer session between a human and Odin. And most of the rest is a commentary on poetry. Moreover, the fragments we have of Norse mythology were set to paper over two centuries after Christianity had supplanted the pagan faith. Much of the context and meaning of what survived is missing or obscure. So not only do we have less of the Norse mythology, what we have is not as easily translated into stories on account of the method and forms by which it was transmitted to us.

The other thing I learned from reading the Prose Edda is that ascribing it to Snorri Sturluson is too simple. Even in English, it’s clear that the Prose Edda is made up of several parts in different styles. Snorri definitely wrote one part of it. He may have written other parts, and he may have compiled it. But I think it unlikely that he wrote it all as it stands today. It’s too internally contradictory as well as being in several styles. 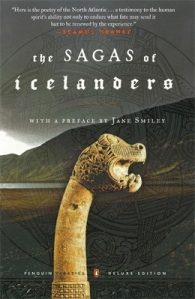 It includes both Egil’s Saga and the Laxdaela Saga, by the way

If you’ve become interested in this material, and haven’t read any of it before, I’d start with the oversized Penguin paperback, The Sagas of Icelanders: A Selection (2000) and Byock’s book to learn about the sagas and the Commonwealth, and then tackle Brown’s book on Snorri and the Prose Edda to round out your study with the Age of the Sturlungs at the end of the Commonwealth and the mythology that prevailed at the beginning.

And, if you want a proper story telling you Icelandic history, then let me recommend the “graphic novel” that is volume 7 of the comic book Northlanders, written by Brian Wood. The bound volume collects a nine-issue story covering the whole history of the Icelandic Commonwealth, from settlement to their loss of independence, through the fortunes of one family. Wood told one other story about Iceland in Northlanders, a haunting short (2-issue) story called “The Girl in the Ice,” set in the dark days of the Age of the Sturlungs, but that’s in the collected volume 5, along with other material. Get volume 7 first, and if you like it, then try volume 5. 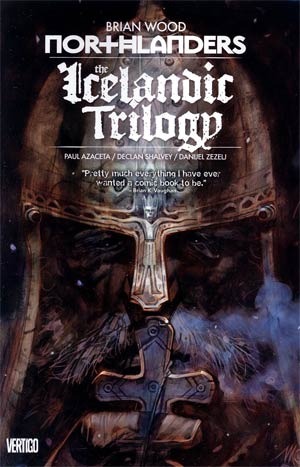 7 Responses to Traveling in imagination to Viking Iceland