Chapter 13 of Prophecies and Penalties

Emily Fisher may have a clue that points to Alex Bancroft, the Prophesied One, as the killer of High Councilor Stephen Nash. So she’s less that thrilled to run into Alex before she’s had a chance to investigate further. It turns out Alex has an agenda of his own. Is he chatting Emily up for a date, or does he have a more ominous design? Questions get asked, questions get answered “In the shadow of Sacred Mountain,” chapter 13 of Prophecies and Penalties, my weekly serial about the investigation of a murder committed at a religious commune in Vermont. If you’re not reading it already, you can start with the first chapter here.

The last time I showed this, I didn’t mention it was the sacred ground with fountain stone on the Shakers’ holy hill

While mountains or hills figure in many religions, the specific inspiration for the Sacred Mountain of this story was the holy hills of the Shakers. Starting in 1837, the Shakers underwent a remarkable religious revival (which I’ve mentioned once before) that featured extensive contacts with manifestations of God and notable spirits from history and the Shaker past. As part of this revival, in 1842 the Shakers set up a sacred hill on the outskirts of each village, featuring an enclosure around a fountain stone, where they gathered to worship in special ceremonies that were not open to the public. These ceremonies had an extensive symbolic spiritual content, notably including sacred feasts and the sacred fountain itself. However, as the revival ended, the ceremonies on the holy hills were abandoned, the fountain stones were taken down and buried, and the sites reverted to their natural state. 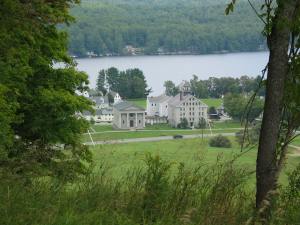 I’ve visited several Shaker villages in recent years. Although the holy hills were abandoned as sacred sites, most are identifiable. I’ve stood on several of them. Mount Assurance at the Enfield, New Hampshire village offers a pleasant view of the village itself and Lake Mascoma beyond.

Although the Shakers served as the inspiration, readers will find that the Children of the New Revelation use their mountain in a different fashion. Indeed, more about the mountain will be revealed in a later chapter, when someone actually goes up there!

And, as a final thought . . . some chapters are a bear to write. Others are a lot of fun. Chapter 13 was fun to write. I hope it is as much fun to read.

I enjoy history because it helps me understand people. I'm writing fiction for much the same reason.
View all posts by Brian Bixby →
This entry was posted in History, Prophecies and Penalties, Writing fiction and tagged detective story, History, murder mystery, occult, religion, Shakers, Writing. Bookmark the permalink.