Trust me; I know what I’m doing! A retrospective on Sledge Hammer!

Sledge Hammer! is a mostly-forgotten TV comedy show from the 1980s with a cult following. It probably doesn’t deserve either to be forgotten or to be a cult show. I’m not sure what it deserves! But it’s an interesting look at the state of American culture and television programming of that era. 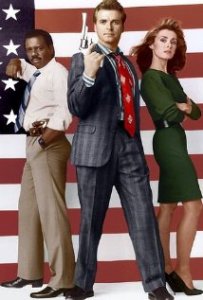 Sledge, flanked by Trunk and Doreau

The series, which ran two seasons in 1986-88, focuses on an over-the-top violent cop in the “Dirty Harry” mold. Inspector Sledge Hammer thinks nothing of physically roughing up a suspect, is ready to use a gun to solve any problem, and believes women are definitely inferiors. So of course in the first episode he’s teamed up with a female cop, one Lt. Dori Doreau, an expert on criminal terrorism, who has a fine kick but doesn’t share Sledge’s love of violence. And to round out the cast is Sledge’s boss, Capt. Trunk, a black officer who feels very frustrated because Hammer is too dangerous to keep around, but his performance is too good to get rid of him.

Episodes parody TV police procedurals while satirizing contemporary cultural phenomena. Movies are a common target, from Witness to Play It Again, Sam to Robocop (satirized as “Hammeroid”). Elvis impersonators, TV game shows, and the plot device of blows to the head causing character changes all get skewered as well during the show’s run. Even the show’s introductory credits satirize gun culture.

Lt. Doreau functions as the audience’s surrogate, trying to prevent Hammer from being too violent or misogynistic while at the same time quietly admiring him and making excuses for him. As might be expected, Doreau is an attractive blonde, which does not spare her from Hammer’s criticism, save when she acts “just like a man.”

I do have to say that the lead actors, Anne-Marie Martin as Doreau, Harrison Page as Capt. Trunk, and above all David Rasche as Sledge Hammer, do throw themselves into their roles and they’re also all good at physical comedy. That said, this is very much Rasche’s show. Page’s Trunk is just a foil for Hammer, while Martin’s Doreau seems to become increasingly passive as the series progresses.

I enjoyed Sledge Hammer! when it originally ran, but upon reviewing it this past week found it less enjoyable than I recalled. Partly due to its emphasis on satirizing popular culture, it has become very dated. Many of its targets are long forgotten. Its misogyny, however satirical, is simply unacceptable today. (Its attitude toward gays is no better.) And, curiously, its violence feels nostalgic, more akin to police methods prior to the 1960s than those used by the militarized police of today.

I suspect Sledge Hammer! has an unacknowledged debt to Police Squad!, the short-lived satirical series than lasted only six episodes but spawned the much more successful Naked Gun movie series. Among other things, Sledge’s bad parking behavior parallels Det. Frank Dreben’s from Police Squad! And like Police Squad!, Sledge Hammer’s jokes are very much a hit-or-miss affair. Sometimes whole episodes work well. The pilot, “Under the Gun,” was well-crafted, “Haven’t Gun, Will Travel” does a good job of sending up Sledge himself, while “Play It Again, Sledge” works as a satire of the film noir genre. But other episodes? “Dressed to Call” would have needed more of the sexuality of Dressed to Kill to actually work, while “Model Dearest” seems to be a rejected Charlie’s Angels script.

Police Squad! was lucky: it lasted only six episodes. Sledge Hammer! ran for 41. Bright ideas and sharp humor can take a series only so far. To last a long time, a series needs heart, it needs characters whose behavior helps drive the satire without being consumed by it. But Sledge Hammer! rarely gave its characters the opportunity to develop. Capt. Trunk got a failed marriage in “Over My Dead Bodyguard,” while Doreau played an entire episode against her usual character in “Desperately Seeking Dori.” That’s about it. The one attempt to delve into Sledge’s character in any depth, “Here’s To You, Mrs. Hammer,” is a cringe-worthy failure. What makes this all so sad is that Alan Spencer, who was the creator and an executive producer of the series, did a great job of building the characters in the pilot. He demonstrated how to integrate character and plot development. But he never again tried so hard and so well.

So is Sledge Hammer! worth watching in 2015? Watch it if you want to see three actors throwing themselves into comic roles, or if you want a view of American popular culture in the mid- to late 1980s. Don’t expect a masterpiece. But possibly the best evidence that the show still has something to show us is that you’ll probably be offended by some of the things you laugh at. After all, this is the series that ended its first season by blowing up San Francisco with a nuclear bomb.

(P.S. If you’re looking for the Peter Gabriel song, well, you’ve wasted your time. However, it’s worth noting that the song and video came out just before the TV show, and it’s said the network, ABC, used the song in its advertising for the series. So, with that thin connection, here’s a link to the award-winning video of that song.)

I enjoy history because it helps me understand people. I'm writing fiction for much the same reason.
View all posts by Brian Bixby →
This entry was posted in Reviews and tagged Anne-Marie Martin, comedy, David Rasche, Harrison Page, not Peter Gabriel, Police Squad, satire, Sledge Hammer. Bookmark the permalink.

3 Responses to Trust me; I know what I’m doing! A retrospective on Sledge Hammer!