Who’s that blogger you follow, or that comments on your blog? Is it a real person, or just someone trying to sell you something? And would you ever want to meet the real person behind that blog in person?

That’s Crispina on the left. Me, I’m sporting a t-shirt with the death’s head design from Mother Goose’s headstone. Call it a tribute to story-tellers.

For the first time, I’ve actually met someone in person whom I did not know before we encountered each other in our respective blogs. Crispina Kemp, who blogs as crimsonprose, has been a longtime follower of my blogs, and I hers. But the chances of our meeting seemed slim, as she lives in Great Yarmouth, Norfolk, England . . . which is a long way from New England, where I live. However, along with my partner E.J. Barnes, who blogs at Shunpike, I was going to be visiting Paris this summer. And the trains to Great Yarmouth take only a few hours. I asked Crispina if she would like a visit. She allowed that if U.K. border control didn’t bar me as an undesirable, she’d be willing to see both of us, and so we laid our plans.

Great Yarmouth is not a likely destination from Paris. Just ask U.K. Passport Control for the Chunnel train from Paris, which asked me point-blank, “Why would you want to visit Great Yarmouth?” Facetious answers came to mind: I want to see where the dragon Skimaskall rests under the windmill farm; I have a hankering for seaside resorts of the Victorian Era; I left my terrorist gear there.

Yes, I was in Paris. No, my French is not very good.

But I settled on saying a friend lived there. This earned a raised eyebrow, but it also earned me a visa stamp, so I was happy.

Traveling from Paris to Great Yarmouth is a mixed bag. The Chunnel train is rapid, topping out at near 300 km/hr, or about 186 mph, and Eurostar is so proud of this that the trains have on-board displays that tell you just how fast the train is going. So, great. But then you have minutes to master how to buy a London Underground subway ticket to get to the station for the next leg of the trip, a local train to Norwich. And then you walk a few feet to another platform for the train to Great Yarmouth. After the Chunnel train, these could not help but seem less impressive. Still, they were clean, they were on time, more or less, and we got to see the countryside.

Crispina met us at the station. No, the Earth did not wobble on its axis at this momentous meeting. Instead, there were smiles all around as we all complimented each other on looking better than our photographs (see above).

Well, it’s actually the expansion of the windmill farm that’s supposed to dig up Skimaskall, but you get the idea.

After helping us check our bags with the bed-and-breakfast where we’d be staying, Crispina took us for a walk along Breydon Water. Those of you who follow her blog (for example, her piece on, yep, Breydon Water) know how much she’s attuned to the landscape. But that didn’t stop us from simultaneously having a conversation about ourselves, what we’d been up to, and comparisons with other places. This kept up the whole time we were together; none of us are shy about talking with friends. And, to be fair, we had a lot to talk about. For example, we did get to see where the dragon Skimaskall (featured in the crimsonprose story Neve) is buried, at least in an alternate reality.

No self-respecting medieval wall would be complete without slits for the archers to shoot the besiegers.

After a tour of some of the remaining walls of Great Yarmouth, we settled down to drinks and dinner. We were in England, and in a seaside resort town, so it wouldn’t do but to have authentic English fish and chips now, would it? And we’d got properly prepared by having some fruity hard cider or English bitter beforehand.

By that point, E.J. and I were tuckered out, and adjourned to our room at the bed-and-breakfast. Said breakfast the next morning offered us more options than either of us could eat, but I got in my serving of black pudding (sausage).

Julian’s cell (reconstructed after the WWII bombing of the church)

Then the three of us were off on the local bus to Norfolk. Yesterday had primarily been a nature walk, so today was a history walk. We explored the old walls and various ancient structures, all the while keeping up a steady conversation. E.J. had a hankering to see the cell where Julian of Norwich, a famed mystic and anchoress, lived and prayed, so that was included among our stops.

At the end, we sat down at a local restaurant by the river for lunch. Chicken and kidney pie for me, such a change after days of French food, and another local beer. And then, too soon, we had to say our good-byes, and depart on the London train, leaving Crispina behind. 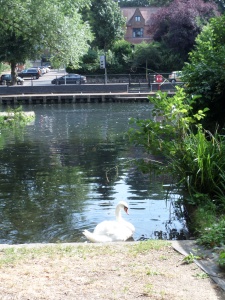 We lunched by the Wensum, which is popular with boaters as well as swans

So was it worth it? If you haven’t figured it out already from the amount I’ve written here, the answer is “yes.” Crispina and I could talk as friends, after so many years of just interacting over the Internet. We had plenty to talk about, from each other’s writings, which took up a surprisingly small amount of our time, to our own histories, to local history, to observing and commenting on the sights of Norfolk. And E.J. is good at making friends, so she quickly found her place in these conversations, too.

And now I need to figure out how to visit Judy, the photographer who blogs at Janthina Images. She’s sent me books to read, so I’m not going to let a paltry 1000 miles or so stop me, not when I went over 5000 to see Crispina!

I enjoy history because it helps me understand people. I'm writing fiction for much the same reason.
View all posts by Brian Bixby →
This entry was posted in Uncategorized and tagged Blogging, England, Great Yarmouth, Norfolk, Norwich, Travel, zombie killer swans. Bookmark the permalink.