How to argue politics on a thread

We’d all love to be triumphant word warriors online. But sometimes other people fail to recognize our genius. They try to engage us in discussions, using “reason” and “evidence” to convince us. Well, saddle up, word warriors, because we have the advice you need to win every political argument.

The more trivial the issue, the more important it is to win

Rule #1: You are always right.

Corollary: The purpose of an argument is to demonstrate you are right. Note we say “demonstrate,” not “prove.” You don’t need to prove anything. After all, you are right.

Rule #2: Your opponents are evil. Not just honestly mistaken, evil.

Corollary: Any trick or sly maneuver is justified in the face of evil.

Corollary to the corollary: It is perfectly OK to insult your opponents. In moderated forums, it is preferable to put this in indirect form, say, claiming that “some people who hold my opponent’s position are idiots.” It’s a tissue-thin excuse, but some moderators will accept it. And if your opponents object, you can always say, in all insincerity, “I didn’t mean it to apply to you, necessarily.”

Rule #3: Never admit you are wrong. Because you aren’t. Because your opponents are evil. Because doing so would give aid and comfort to the enemy.

Corollary: When confronted by reasoning or evidence that seems to demonstrate that you are wrong, recognize that there’s something you must be missing that justifies your position. You just can’t think of it at the moment. Have the all-purpose reply in hand, “You’re ignoring all of the evidence and reasons that prove you’re wrong, but I don’t have time to go into them all here.” It must be true.

Corollary: The best way to state your political position is with a sneering comment. It clearly expresses your disdain without giving your opponents anything to argue with. Second best way is to use an empty slogan, something that conveys meaning without being specific about anything. “Hope,” the Democrats’ slogan in 2008, is a good example; it committed the Democrats to nothing specific. Even the apparent content of “Repeal and replace,” the Republican slogan used against Obamacare in 2010, was illusory, since there was no indication of what any replacement would be.

Rule #5: If you do have to get into a discussion, remember, the goal is to prove you are right and your opponents are wrong. Your objective should be to manipulate the discussion to get your opponents to say something wrong, something that proves they are evil.

Corollary 5.1: The best method to win is to define terms such that you have to be right. For example, “’Down’ means under someone’s feet, ‘up’ means over someone’s feet. Something can’t be up and down at the same time. Hence the Earth must be flat and cannot be a sphere, because if it was, my ‘down’ would eventually become someone’s ‘up’ on the other side, and we’ve already established that that can’t be true.” Not only is this method invincible on its own terms, it diverts the discussion away from arguing about actual facts and reasons to arguing over definitions. Since they’re your definitions, you are in control and have the advantage. Use it.

Corollary 5.2: Another good method is to ask leading questions, to guide your opponents into either being trapped into agreeing with you or stating their support for some obviously reprehensible position. That way you avoid having to actually argue your position, and if your opponents try to qualify a previous answer to escape your trap, you can accuse them of intellectual dishonesty. And incidentally, this procedure usually takes so long that everyone else loses interest in the thread.

Rule #6: If by some unfortunate chance the thread turns into an actual rational exchange of thoughts between parties, force your opponents on the defensive.  Quickly offer several reasons why your position is correct, certainly without evidence or arguments, and preferably in such a vague or brief form that it will be hard for your opponents to figure out what you actually mean. It will take them ages to figure out responses for all of your points. And remember, until they address all of your points, you’ve won and they’ve lost. If by some unfortunate chance your opponents actually begin presenting their position with supporting arguments and evidence, question them intensively. Accept nothing they say on faith, since it must ultimately be wrong or misleading anyhow. Demand they supply arguments and evidence to back up all their assertions. If they provide evidence, question the reliability of their sources.

Corollary: Although not quite as good at bollixing up an argument from the beginning, continually changing the subject to related points works about as well in keeping your opponents on the defensive. And it is superior in one respect, in that it makes it easier to ignore any arguments they successfully make against you.

Rule #7: Sometimes your opponents simply won’t oblige you by making the argument you know you can destroy. So stuff words into their mouths and make it for them. If you’re, say, debating tax policy, you might say, “Of course my opponent wants this measure, because it will wreck the economy, and my opponent wants to wreck the economy.” Exaggerating or misrepresenting what your opponents say can be used to similar effect. 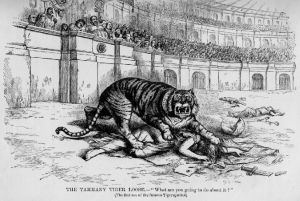 “Don’t you dare call me a killer. I’m the real victim here!”

Rule #8: Any criticism of your position or arguments constitutes a personal attack on you and persecution for your political beliefs. Don’t be afraid to claim victimhood at the earliest opportunity. Once again, it gets you away from the unsafe terrain of reasons and evidence, and into discussing your emotional state, putting you in control once again. You can even demand that your opponents be made to withdraw from the discussion, on the grounds that they have hurt your feelings. No apologies are acceptable.

Rule #9: Victory is yours if you can triumph on any point. If there is just one point of yours your opponents can’t dispute, if on even the most insignificant detail you can claim to have triumphed, you can claim victory and leave the thread with your head held high.

I enjoy history because it helps me understand people. I'm writing fiction for much the same reason.
View all posts by Brian Bixby →
This entry was posted in Uncategorized and tagged Blogging, current-events, debating, Humor, politics, satire. Bookmark the permalink.

9 Responses to How to argue politics on a thread